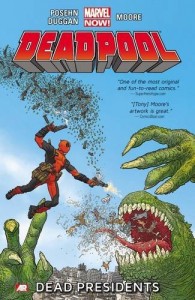 If box office receipts are to be believed, and hey we all know money doesn’t lie (it bends the truth a little bit more than most of us would ideally like, and it may well be responsible for the endemic spread of avarice, corruption and selfishness, but strictly speaking it doesn’t tell mistruth’s), then it would seem that the whole world is going crazy for the Merc With A Mouth and that the fourth wall shattering anti-hero is now more popular than rollerblading and yo-yoing combined. Which is, as you know, really popular.  So , it shouldn’t really come as a surprise that Marvel have turned their spotlight back on to some of his more popular tales of daring-don’t and catastrophic misadventures made good, and right up there in the Top Five, well, Top Ten at least, maybe Top Twenty at a push, is this humdinger of a doozy, Dead Presidents.

Written by popular geek head-banging comedian Brian Posehn and the Marvel maestro Gerry Duggan, Dead Presidents is the story of how one disenfranchised necromancer, in a bid to make America “great again” (Sounds familiar doesn’t it? Do you think The Donald reads comics? Do you think The Donald can even read? Or maybe The Donald has a secret occult history and communes with dark forces and ancient beings from beyond the cosmos. If he does, it might explain his hair) revives all of its past Presidents in the deluded hope that they might reinvigorate it’s communal spirit and set it back on the path to honour, goodness and virtue. The things that come back from the grave though, are anything but presidential and instead of saving the country they once led, they band together and set out to destroy it. With all of her usual arsenal of superheroes unable to act, due to the public relations nightmare that would spring up in the wake of any hero ripping apart a former president regardless of the fact that they’re dead, America has to rely on the talents of the morally ambiguous Deadpool to save her, and her citizens, from imminent destruction. Oh, and he’s also Canadian, which, quite frankly, just adds insult to injury.

Full of glorious gore, corpse shredding action, zombie mayhem, cadaverous comedy and horrific hilarity, Dead Presidents is a full throttle ride through the darker recesses of Wade’s world that doesn’t take its foot off the gas, or stop firing one liners, marvellously cheesy jokes and puns at its audience for an instant. It ridicules the pomposity of office and authority and turns the accepted political norms upside down, by turning heroes into monsters, and by doing so, turns stiff, cold, outmoded ideas of power and its accepted facets into something funny and engaging, while slyly throwing a little bit of constitutional and governmental history into its plot.  And Tony Moore’s immaculately and anatomically (often hideously so when limbs are hacked off and organs spilled) detailed art is a joy to behold, adding an extra crimson filled, blood spattered magnificence to the tale. If you ever wondered why people love Deadpool, then look no further than Dead Presidents, because this is Wade doing what he does best. Killing everyone and everything and having a good time while doing it. Move over Bruce Campbell there’s a new zombie slaying sheriff in town. Hail to the chief baby… Tim Mass Movement