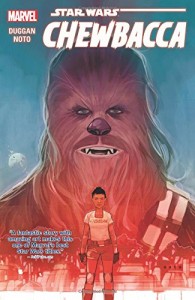 It had to be tough, always living in Han Solo’s shadow, being known as the partner of the man hunted throughout the galaxy by Jabba the Hutt and the co-pilot of the ship that made the Kessel Run in less than twelve parsecs.  Or at least for most people it would, but then most people aren’t Chewbacca, the loyal to the end, seven and half foot tall Wookie who hates losing at Dejarik. But there comes a time when everyone must walk their own path, and in Chewbacca, the Millennium Falcon’s first mate, while on a heart-breaking, personal mission, has to out his plans on hold when he crashes on Andelm-4 and ends up being blackmailed, coerced and emotionally bullied into helping the local populace who have fallen foul of local loan shark, gangster and slave master, Jaum.  Having never backed away from a fight in his shaggy life, Chewie reluctantly (at first) agrees to help out and finds himself immersed in a flying-by-the-seat  of his non-existent pants adventure in which he helps free slaves, battles ne’er do wells and ends up tangling with a battalion of Stormtroopers and the crew of an Imperial Star Destroyer.

Chewbacca isn’t a complicated story, the plot won’t leave you befuddled, there isn’t a host of underlying, complicated angles and subtext that you need to try and wrap your brain around and it doesn’t try to explore or incorporate complex social structures and ideas. But, that said, neither was Star Wars, and just like the well, and source material, from which it sprang, Chewbacca is a relatively straight forward, action packed, adrenaline filled tale that’ll leave you grinning from ear to ear, as Gerry Duggan and Phil Noto punch the hyperdrive and transport you to that galaxy, far, far away. It looks incredible, thanks to Noto’s beautifully drawn, expressive work and Duggan keeps the thrills coming in his delicately balanced mix of plot and characterisation. Duggan and Noto’s book doesn’t try to re-invent the ion engine or bring stability to the force, but what it does do is deliver a compelling and absorbing Star Wars saga in which the Wookie definitely wins.  And sometimes, that’s just what you want, and all that you need… Tim Mass Movement