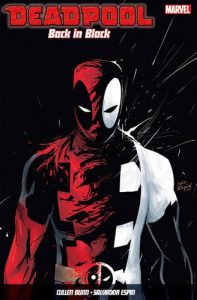 Cullen Bunn authored Deadpool books are like the ever elusive 63B bus. You wait an eternity for one to arrive, and then just when you’ve given up hope that you’ll ever see another one before you shuffle off your mortal coil, two turn up at once. Not that I’m complaining, because, you know, two is better than one, just ask the Count in Sesame Street who I swear cackles a little louder after he utters, out loud, the second digit in the Arabic numerical system.  And because, I’m a bit of a Cullen Bunn fanboy and know that any book bearing his name is going to be more than worthy of a couple of hours of my time. Especially when said book transports you straight back to the eighties without the aid of a Tardis and without having to sacrifice your dignity by wearing stone wash jeans, watching the Caravan of Courage or being forced to listen to big hair metal that reeks of spandex and hairspray. Okay, so no-one forced me to listen to it, but I was young and everyone makes mistakes, so let’s just move on and forget all about it shall we? Like I was saying, you hang around long enough and good things come to those who wait. Good things like Back in Black – which sort of loosely ties in with then hair metal through its whole AC/DC nomenclature link. Anyway, that’s enough of the whole metal thing, back to the book and back to Deadpool.

Loosely following on from the events of Deadpool’s Secret Secret Wars in which Wade’s long forgotten involvement in the original Jim Shooter penned crossover event was finally revealed, Back in Black is the story of what happened to the Venom symbiote between the time it was rejected by Spider-Man and found a willing host in Eddie Brock.  For a while it found happiness with the first human being that it ever came into contact with on that far off alien world, when it once again crossed paths with, and saved the life of, Deadpool.  Back in Black is the story of man who desperately wants more than anything to do the right thing and be a hero, and the monster that grants his heart’s desire, if only for a little while. It’s the tale of their adventures together, fighting crime on the streets of New York, as they team up the Black Cat, the Power Pack and a nihilistic, semi-psychotic clown to battle the forces of evil, avoid being kidnapped by a squad of alien bounty hunters and stay out of Kraven’s sights for long enough to prevent them becoming another couple of trophies hung on the wall of the hunter’s undoubtedly creepy man cave.  And it’s a story of mistaken identity, a tantalisingly close dalliance with a super-powered member of the opposite sex and the inevitable break up of their burgeoning friendship due to Deadpool’s lack of appetite when it comes, and enthusiasm for, eating people.

As it always is, Cullen Bunn’s Deadpool is salient, intelligent, funny and ensures that his readers feel a genuine warmth for, and comradeship with, a “hero” who by all rights, given his history of unmitigated violence and sociopathy, they (and by they, I obviously mean you and me. What, you’re reading this aren’t you? There you go then. You’re obviously a Deadpool kind of person) should be repulsed by.  Having grown up reading comics in the eighties, my nostalgia-o-meter nearly overloaded while revisiting the era in this long hidden chapter of Deadpool, Spider-Man and Venom’s history. And while it’s packed with action, wisecracking dialogue and an acute attention to detail, aided in no small part by the period-rific and sublime art of Salva Espin, Back in Black is essentially a story of forbidden love. Of the bromance between a socially maladjusted mercenary and an extra-terrestrial parasite with a hankering for human flesh that revolves around their mutual fondness for brutality. Get your hankies ready and prepare to shed a tear or two for Wade and his long lost love… Tim Cundle