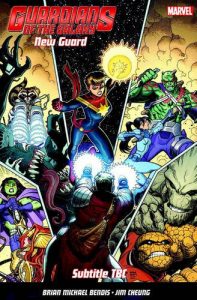 Once upon a time there was a rag-tag bunch of heroes who travelled around in Space saving countless people and worlds from all sorts of bad guys and evil monsters. Even though they argued a lot, they came to think of each other as family and wouldn’t think twice about running into the depths of Hell to fight the Devil himself if any one of them was in trouble and needed a helping hand. This family called themselves the Guardians of the Galaxy and they believed that nothing and no-one could tear them apart. And they were right. Or they were, right up until the moment one of their sisters called and asked them to help resolve her conflict with another member of the family. Being family, they raced to the rescue; little knowing that it would be the last time that any of them would happily plunge into the depths of danger together. That’s right boys and girls, the party’s over and Civil War II is the story of how Captain Marvel managed not only to tear Earth’s superhero community apart, but in the process of fighting her personal little war with Tony Stark, she also managed to do what innumerable alien armies, galactic warlords and messianic emperors had failed to. She ripped the Guardians of the Galaxy apart, and Civil War II is the story of how she brought them crashing down from the inside.

I’m sure that by now, everyone and their dog (or cat, or other companion animal, I’m not petist. Is that even a word? Or a thing? Probably. Or maybe not) knows about, and what happened in, Civil War II, how the Guardians became involved and ended up getting stranded on Earth. And how much Rocket hates the frutackin’ world that he now has to call home.  In this latest, and possibly last, chapter of the story, Brian Michael Bendis pulls back the curtain and goes behind the scenes of the part that the Guardians played in the superhero conflict , revealing  how secrecy ultimately caused Quill’s team to want to go their own ways. From their leaders part of view, his understandable desire, and mistaken belief that by keeping this secret he was doing the right thing is forgivable, but Captain Marvel’s clandestine motivations to ensure that the truth remained hidden from her “friends” is far less comprehensible. Especially when what she so desperately struggles to keep under wraps is one of the things that originally lit the touch paper that started Civil War II, which leads you to belief that she either learnt nothing from the beginning of the conflict, or wanted on some level, to disrupt the Guardians relationships with each other by sowing disharmony and mistrust in their ranks. Either of which would add an interesting angle to her character, but wouldn’t change the fact that after the role she played in Civil War II, she’s become thoroughly unlikeable, despite Bendis’s best efforts (which are Herculean) to humanise her, and her actions, in these pages. Beautifully scripted and illustrated, Guardians of the Galaxy New Guard: Civil War II, while being filled with plenty of vivid characterisation and wonderful humour  is the book that you don’t want to read, because you know it isn’t going to end well for any of the players. And no matter how much you steal, and prepare, yourself for the fact that it’s going to happen, you just don’t want the Guardians to split up. Damn you for making me fall in love with Guardians of the Galaxy Bendis and damn you making me love this book. Now do the right thing and get the band back together… Tim Cundle