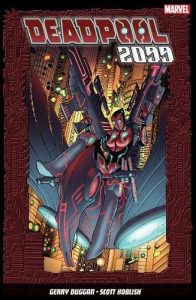 So who doesn’t know Wade Wilson, better known as Deadpool, Marvel’s most popular super hero who isn’t Spider-Man? Anyone?  If you’re even slightly into comics, you’ll be aware of him even if you haven’t read anything he’s been in.  That’s a feat in itself considering he’s been in practically every Marvel comic at some point in recent years.  He’s an Avenger, an X-Man, a long time partner of Cable, has his own team (the Mercs for Money) and is available for team ups for the very reasonable price of a chimichanga! There was also the movie starring Ryan Reynolds which is well worth a watch. Considering he started out as a homage to DC’s Deathstroke the Terminator he’s done pretty good for himself.

But what about the 2099 version?  2099 is the range of comics Marvel created in 1996 to show us the heros and villains of the near future.  There were versions of Spider-Man, the X-Men, the Punisher and several others.  It wasn’t massively popular and the only character that still appears regularly is Spider-Man 2099 who got trapped in the present day Marvel universe.  Because there clearly aren’t enough Spider-Men running around as it is.  So the Deadpool of 2099 is the Deadpool of the near future.  She’s a girl and there’s two of them.

Now far be it for me to type a micro-rant about Marvel’s current obsession with turning all it’s heros into females, but here it is anyway.  Tere are two female versions of Deadpool and he’s already got Gwenpool, whoot her own series and everything. Thor’s now a woman, as is Iron Man.  There are now female versions of Captain America, Black Panther, White Tiger, Wolverine, Hawkeye and a sackload of others.  It’s not like Marvel doesn’t have previous in this area (which started with She Hulk and Spider Woman) but even so, the comics of the last couple of years have (in my opinion) taken it to the extreme.  There’s even a female Vision now.  Not that I’m against female heroes, you understand, I’d just like to see more original female heroes than female versions of male heroes.

So if female versions of male heroes seems to be the trend at Marvel, it makes perfect sense that Marvel would want to make a female version of their most popular character (who isn’t Spider-Man).  The two presented in Deadpool 2099 are both his daughters, albeit with different mothers.  There’s Warda, the daughter of Deadpool and Shiklah, his demon princess wife; and there’s Ellie, the daughter of Deadpool and Preston, a S.H.I.E.L.D. agent who met Wade when she hired him to take out a bunch of zombie presidents.  So far, so Deadpool.

Do you need a plot summary? It’s Deadpool FFS! There’s a lot of fighting and stuff gets blown up. Oh go on then.  Warda wants to find her Hellspawned mom who went missing after Wade and the Avengers stopped her taking over the world or New York anyway. She’s got Wade held prisoner and is making him watch daytime TV on an infinite loop until he tells her where mommy is. She’s pissed and she’s got a robot dragon and her gang, the Bobs, to back her up.  Ellie (previously assumed dead) wants to rescue her dad and stop Warda from using the Deadpool name as she wants to be Deadpool herself.  She’s pissed and doesn’t have a robot dragon or a gang to back her up.

So the two daughters have a massive fight, Deadpool (Wade) gets his freedom and has to sort out his dysfunctional family.  But Wade’s a whole lot older and a bit out of practice so he calls on his mate, the Immortal Iron Fist, to help out.  He’s old too.  There’s a lot of fighting and stuff gets blown up.

Deadpool 2099 collects Deadpool (volume 5) issues  6,12,19 and 25.  It’s the usual mix of anarchy, violence and one-liners.  You get three Deadpools for your buck and comes presented in that slightly cartoony art style that’s all the rage these days.  At £11.99 it’s as cheap as chips so do yourself a favour and put in on your Xmas list, it’ll give you something cool to read during the Queen’s speech. Paul Ferriday