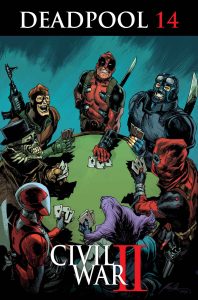 Deadpool and his Mercs for Money are clearly the best super team around. The get along like family, right? Wrong. So when Civil War II divides the Marvel Universe in two – does that spell the end for this motley crew? Find out as the Merc with a Mouth crashes headlong into the biggest comic event of the year in DEADPOOL #14 – courtesy of blockbuster creators Gerry Duggan and Mike Hawthorne! When there’s a cosmic level threat – the Mercs are there to answer the call. But the cracks are beginning to show. Deadpool can’t hold his crew together much longer. New Inhuman Ulysses and his powers of predictive justice may just be the stroke that broke the camel’s back. Is this the end of the Mercs for Money? But they just got their own ongoing series! Find out as Civil War II erupts this June in DEADPOOL #14! 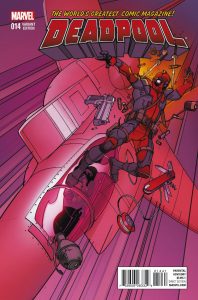