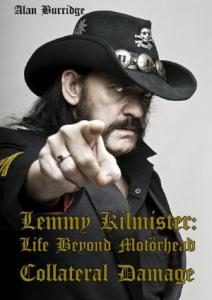 It would be easy to assume this is a cash-in on Lemmy’s death; however Burridge who runs the Motorheadbangers fanzine, began this project a long time before the great man’s demise, and with over 40 years of dedication to his name, kudos should be given to the author for completing the project under the circumstances.

The rather bizarrely two titled book is basically an analysis of Lemmy’s many side projects including group & solo recordings, cover projects, guest spots, film cameos and a whole load of extracurricular activities that Kilminster involved himself prior to, and during, his time fronting Motorhead, although the book also contains information on what Motorhead were up to during these side projects albeit in minor detail.

It’s what I call (with no negative connotations intended) a perfect ‘Toilet Tome’ as it’s nice to flick through and read about the stuff Lemmy wrote for Ozzy or his cameo in ‘Poultrygeist: Night of The Chicken Dead’ or his numerous recording with members of the Stray Cats as The Head Cat etc. in random order while on the can. In other words the order in which you read the book isn’t as important as the information itself, which in the main is quite copious, but not so in depth that it would leave the less dedicated Lemmy buff a tad bored.

The sheer volume of projects that Lemmy played a part in is astounding and a testimony to the man’s ability to walk the walk and make the most of his time on this earth. I think even the most knowledgeable Lemmy buff could find something new in Burridge’s book, which would appeal to both the average Motorheadbanger and the more serious collector looking to complete their collection of Lemmy recordings (good luck with that!).

The only downside I found with the book were some of Burridge’s rather unnecessary personal recollections, such as the time he and members of the band visited a Bristol strip joint – rather pointless and unnecessary in the context of this book.  Ian Pickens