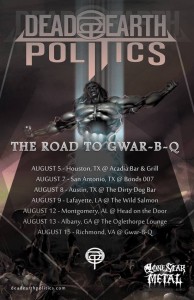 Austin, Texas-based indie metal machine DEAD EARTH POLITICS have announced a string of tour dates leading up to the band’s August 15 performance at the 6th annual GWAR B-Q, where they will join the likes of DOWN, GOATWHORE and co-headliners CLUTCH as the Richmond festival erupts into a rowdy and raucous weekend celebrating 30 Years of GWAR!

Adding to the mania, three time winners of the Austin Chronicle’s “Austin MUSIC Awards’ Best Performing Metal Band” award, DEAD EARTH POLITICS have been hand-picked by Grammy nominated metal icons, GWAR, as Ambassadors of Mayhem. As the band tours hard towards the fest, they’ll be turning their concerts into nightly parties resulting in a week-long celebration of the presence and impact of the intergalactic Scumdogs’ 30 years on Planet Earth! These special events include everything from masquerade balls to good old fashioned Cold Cock whiskey fueled birthday bashes. Shenanigans from Texas to Virginia will be chronicled by the accompanying film crew and fans can follow the fun as highlights are showcased daily on Metal Injection, GWAR social media outlets, and DEAD EARTH POLITICS‘ own Youtube channel.

The band has shared stages with some of metal’s biggest names, including DOWN, CORROSION OF CONFORMITY, and DANZIG, and are thrilled to be chosen to participate in GWAR’s historic event in such a unique way.
“To suggest that we are stoked to carry the Gwar-Banner for such a killer event and such an epic year would be an understatement. Being an independent band and having been offered this opportunity is something we don’t take lightly and I, personally, plan on focusing on every moment for my future rock star spank bank! Hail Scumdogs!” says DEAD EARTH POLITICS front man Ven Scott.

A promo video for The Road to GWAR-BQ has been posted at this location.

The March 14 release of the band’s newest EP, Men Become Gods, has seen DEAD EARTH POLITICS‘ star rise amongst metal journalists and critics from around the world.

The second in a series of three EPs that began with last year’s acclaimed The Queen of Steel, Men Become Gods is available on CD and digital formats. The EP is available at the following locations: