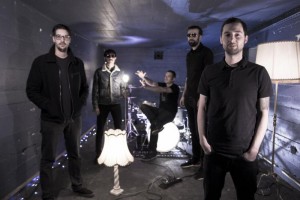 Destination Unknown shows several sides of WATERTANK, the band merging grittier, noise rock-influenced elements and infectious, melodious alternative/post-rock atmospheres. One of the prime tracks on the new album, the infectious and airy “Contrails” effortlessly heaves the band’s output into the atmosphere, leaving its mark behind, as its name implies. If you’re into Torche, Quicksand, Jawbox, Sense Field and Failure, WATERTANK is something for you experience, and “Contrails” is the perfect way to get you there.

Two years after their first release, Nantes-based WATERTANK returns with their nine-track full-length, Destination Unknown, bringing forth nearly thirty-five minutes of brand new material. While the album came together quickly, being composed and recorded with unusually short notice, the LP cohesively reveals a more confident band through this new batch of strongly crafted songs. The Nantes ­based band is still in love with melodic hooks, and down­tuned heavy riffing, as heard especially in cuts like “Dcvr” and “Doomed Drifters,” yet sees them evolving from their post­-hardcore background in tracks like “Contrails” and exploring new territories completely within “Scheme” and the title track, as always aiming to deliver lasting listening enjoyment. Once again recorded by Patrice Guillerme (Papier Tigre, Patriotic Sunday) and mastered by Carl Saff (Coliseum, Pilot To Gunner), Destination Unknown marks a step forwards for the renewed line­up.