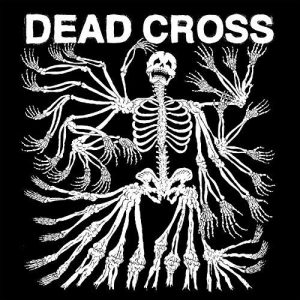 Around a quarter of a century ago, an old girlfriend of mine told me that I was the Mayor of Weird City and when I asked her what she meant by that, she told me that it was a polite way of saying that I was bat shit crazy, terminally insane and the strangest person that she’d had the misfortune to meet. So, I’m guessing that she never met Mike Patton, Justin Pearson, Mike Crain or Dave Lombardo, or as they’re more commonly known Dead Cross; because if she’d heard the music that these cats make she’d have thought that I was perfectly normal and well-adjusted and wouldn’t have thought that I was the least bit crazy*.  Dead Cross really is more than the sum of its parts, drilling a high speed hardcore fusion of Slayer, The Locust, Mr Bungle and Fantomas into the middle of your brain, before exploding in a fantastic cacophony of beautifully controlled aggression and chaos. This is the sound of focussed insanity and of all of the collective noises, voices and unwritten melodies that live inside your head, that’s been carefully filtered and sieved through a barely tangible crossover mesh before being let loose, in all of its magnificent glory, on an unsuspecting world.  All aboard the crazy train, the next stop is Dead Cross… Tim Cundle