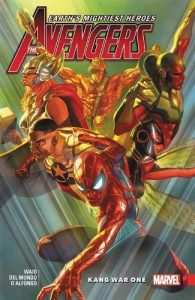 Robert Frost once spoke of two divergent roads and how he chose to journey down the one less travelled; and in Kang War One, Mark Waid and Mike Del Mundo have elected to follow Frost’s lead and take the Avengers with them. After the Avengers gain two new members following their “old” team mates departure to form the Champions, the acquisition of a new benefactor and in the aftermath of Vision’s revelation that the only way for the Universe to be free of Kang was to remove him from the timestream as a newborn, things, for the team, begin to take a far more serious note. Having effectively declared war on Kang, the Avengers are drawn into Vision’s private conflict and in a fitting act of revenge, Kang removes them from the timeline by slaughtering the Avengers, one by one, in their cribs. Saved by an aberrant incarnation of their destroyer, the Avengers realise that the only way to beat Kang is to play him at his own game; and so from the storied and complex history of their team, they recruit its best incarnations and send them to various points in time, setting out to defeat Kang through the destruction of everything he holds dear and needs to succeed.

Kang War One is a complex, beautifully structured and immaculately plotted and planned tale that adheres to the theory, first postulated by another beloved institution of the fantastic, that rather than being linear and rigid, time is malleable and can be changed and manipulated according to the desires and wills of those in a position to do so. You know the whole wibbly wobbly timey whimey thing. There are moments when, if you think about Kang War One too hard, it’ll start to melt your brain, so just roll with it, because I’m pretty sure that Waid, in researching all the stuff that knits reality together in order to write Kang War One did far more than just dip his toes into the ripples of Einstein’s pond that permeate throughout the internet.  His story, as well as being rich in dialogue and characterisation, doesn’t pander to the lowest common denominator and treats its audience with respect, assuming that they have, and possess, a similar intellect to its creator.  However that doesn’t mean that Kang War One isn’t action packed and bulging with wit, humour and a multitude of other ideas, it is. And thanks to the ethereal, dreamlike and nostalgic art of Mike Del Mundo, Kang War One is elevated into the ranks of the greats and as opening salvo’s go, this first post Civil War II Avengers outing bodes incredibly well for the future of comicdom’s premier superhero team. I think it’s time I began to wear those shades that Timbuk3 sang about… Tim Cundle