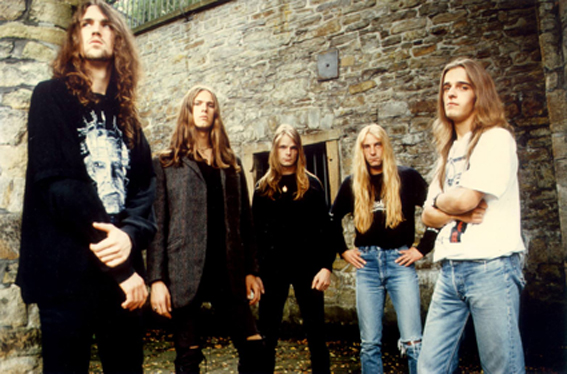 Century Media Records are very proud to announce the cooperation with DARK MILLENNIUM for the release of the band’s entire discography.

Germany’s DARK MILLENNIUM were formed in 1989. With the release of their demo tapes “The Apocryphal Wisdom” (1991) and “Of Sceptre Their Ashes May Be” (1992) the band heavily stirred up the German Death Metal underground as one of the most promising – and surely one of the most unique – Death Metal bands of that time. While other followed the paths paved by international acts as Death, Morbid Angel, Entombed, Obituary or Morgoth, DARK MILLENNIUM‘s vision always was to create something special and new, something not instantly comparable to the big names of the scene. To this very day DARK MILLENNIUM‘s debut album “Ashore The Celestial Burden” remains one prime example of dark, varied and very atmospheric death metal packed with twisted riffs, haunting melodies and an uncanny instinct for intricate song structures, entwining the gloom of early UK Death Metal with the technical finesse of albums like “Piece Of Time” or “Blessed Are The Sick”. The follow-up album “Diana Read Peace” led DARK MILLENNIUM further away from the sound of the early days towards the realms of Progressive Metal that only few bands like Atheist or Cynic dared to tread at that time. May it be the musical differences or internal quarrel that caused DARK MILLENNIUM‘s untimely demise, sure is they were far ahead of their time and therefore never had the chance to reap what they have sown . until now. The release of their complete work is a tribute to one of the best Death Metal bands to ever emerge from the German soil.

DARK MILLENNIUM‘s guitarist and musical mastermind Hilton Theissen has carefully remastered both albums from the original sound sources, while Patrick W. Engel at Temple Of Disharmony (Asphyx, Morgoth, Grave, Dissection) has restored the two demos. The sound of the entire material is absolutely mindblowing. DARK MILLENNIUM‘s discography will be released as a fairly-price limited 4CD version and on vinyl as three separate limited LPs. Detailed info on the different formats as well as exact release dates will be revealed in the coming weeks.

Keep your eyes open and witness the resurrection of unearthly Death Metal
darkness of ancient times.