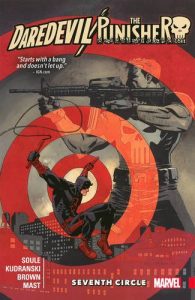 New York, was once described in a relatively famous musical as being “a helluva town”, and given the journey that Daredevil and his sidekick, Blindspot, are forced to undertake in Seventh Circle, I’d tend to agree with Gene Kelley, Frank Sinatra and Jules Munshin’s opinion of the city, but probably not for the same reasons. Thanks to the Punisher taking a pot shot at, and deciding to inflict his own brand of justice upon, a Russian mobster being sent to Texas for trial, Daredevil intervenes in order to make sure that the criminal gets his day in court instead of being sentenced by Judge Castle and his twelve good rounds and true. Racing against Frank and desperately trying to keep his prisoner from escaping, Daredevil’s path to his eventual destination, JFK airport, is fraught with brutality, danger, death defying action and the constant nagging fear that maybe, just maybe, Frank Castle is right this time.

Named after the journey into violence represented by the seventh circle of Hell in Dante’s Inferno, Charles Soule’s four issue arc is an adrenaline riddled, noir infused campaign through the darkness of the Big Apple. Kudranski’s artwork perfectly encapsultes the desolation and loneliness of Daredevil’s quest and the brief, but devastating explosions of terror, confusion and chaos that litter it, and ands dark energy and a frightening sense of  place, purpose and realism to the authors story. Juxtaposing Murdoch’s nearly immoveable sense of morality with Castle’s absolute belief in his vision of jurisprudence, Soule paints a picture of the grey area that exists between both when they are confronted by the absolute worst that humanity has to offer. And as Daredevil descends further into “Hell”, the only thing that will allow him to emerge unscathed, is the certainty that he’s right and Frank is, as ever, wrong. Clever, considered and driven, but with enough sinew snapping fisticuffs to keep even the most rabid action junkies happy, Seventh Circle is proof positive that Soule is the man to carry Matt Murdoch’s enduring legacy, and mythology, forward as the street level protector of the city that never sleeps. New York.  It’s a helluva town… Tim Cundle