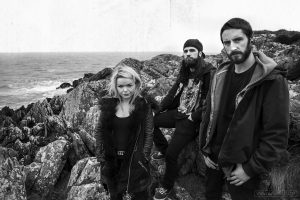 Most people never get to meet their heroes, fewer still get to share the stage with them.

The date was the 30th of May 2012. We had just supported the mighty Machine Head in Belfast and while the experience was beyond comprehension we knew ourselves that our hometown show in Dublin’s Olympia Theatre was going to be the biggest show of our career since the bands inception in 2008.

The Belfast show which took place on the 28th is a blur of nerves and excitement when I try to remember it. It’s like I was walking through a thick fog, the lights were on but no one was home. I remember at various points during the day saying to myself “Take this in, this opportunity may never come again”. One of those moments was standing in Machine Head’s dressing room, surrounded by platters of different sliced meats and vodka bottles (still full, it was early) while Dave McClain warmed up on an electric kit in the corner.

It was so surreal. I am a small guy from a small town in the middle of Kildare, I didn’t belong there. I shouldn’t be taking to the stage in a few hours to open a show for my favourite band, but I was. I had to pinch myself repeatedly.

The show itself came and went, I honestly couldn’t tell you what happened on that stage for those 30 minutes. I was completely on auto pilot. I came to as we were packing up the drums side stage, thinking “What just happened??, Is it over already??”

I woke up the morning of the Dublin show feeling a lot more nervous than I thought I would for some reason. All I could think about was what could go wrong at the show. What were other people thinking about us getting the slot. Were they happy with us on the bill? Were we good enough to be on the bill even? It felt like I was being interrogated by myself. My head was spinning but one thing was for certain. This day was not going to drift past like the one in Belfast. I would be clear, here and in the now for the whole day.

The drive into Dublin was an eternity. The longest 20 minutes of my life. Every step closer to that venue, my heart started to beat quicker.

We loaded into the Olympia, got our passes for the show and were shown to our dressing room. Yes, our very own dressing room. Complete with a mini fridge full of beer and water and snacks, all for us. It was like being treated like royalty.

I remember standing in the dressing room doing my vocal warm ups and getting the 5-minute warning from the stage manager as clear as day. My stomach leapt into my throat, this was it. As we were walking to the stage I just happened to meet Phil Demmel on the stairs. “Hey Dan The Man! Kick some ass dude” he said and fist bumped me as we passed in the narrow stairway of the backstage area. Phil fucking Demmel knew my name, Me! I couldn’t believe what had just happened.

The 3 of us gathered at the side of the stage. We were ready to make this performance go down as one of our best. We all knew what we had to do and nothing was going to stop us.

From the first note of the first song we were out for blood. As the set progressed we made sure that we poured every ounce of energy we had into that performance. I was screaming so hard I thought my throat was going to rip apart. I was headbanging so much I thought my neck was going to snap, but I didn’t care. It was all or nothing, or as we like to say in the band “Go big or go home”.

The last note of “Reign” came to a screeching halt and the Olympia erupted with cheers of approval. We had done it. All those previous worries I had during the day we drowned out by a screaming crowd of rabid metal fans who had embraced us and it was the most satisfying feeling in the world, and the night only got better from there.

After we got rid of all the gear it was time to watch Machine Fucking Head in action and from the best seat in the house, side stage. They blasted through their set, anthem after anthem, pit after pit. The band were in flying form. Really separated the men from the boys. I was captivated with Robb Flynn, along with the rest of punters in the venue that night. Hanging on his every word, fulfilling every request. “Dublin, get your fists in the air” he would spit and up they went!

As the night drew to a close, a familiar drum fill followed by the most iconic harmonics in Metal music stormed out of the P.A. “Davidian” was summoned to absorb every last piece of energy available. The room erupted like Mount Vesuvius on steroids. Bodies, beer and blood were all I could see from the side of the stage. I was enthralled, so engrossed in what I was witnessing that I almost failed to notice Phil gesturing, calling us onto the stage to sing the line that every fan of Machine Head dreams of doing. Well, he didn’t have to tell me twice. I ran out on stage with Danny, Claire and Ben from Evile and screamed at the top of my lungs “LET FREEDOM RING WITH THE SHOTGUN BLAST” and that was the moment that Machine Head ruined my life.

Up until that point playing in a band was merely a hobby, my escape from reality. A way of venting my own personal frustrations upon the earth and maybe just maybe getting a couple of cool memories along the way with my friends. That night on the 30th of May 2012, it all changed. No longer was the idea of being in a professional band just a dream, I had lived it. I had seen beyond the vail. I had gotten a peek behind the curtain and loved every second of it. I knew now that the band was no longer something I would do in my spare time. On that night, it had transformed into a beast with an insatiable hunger for success. Never again would the idea of a normal life be enough for me. I had to have more of this. This is what I must do with my life no matter what. It is encoded in my D.N.A. There is no alternative. Any other prospects or dreams I may have had are gone, this is who I am, and I have Machine Head to blame.

Dead Label’s new album Throne of Bones is out now