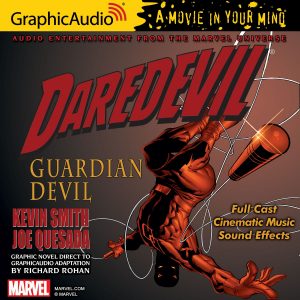 While I could, and would, never claim to be a premier league Daredevil fan, there a couple of writers whose tenure in the dark alleyways of Matt Murdoch’s Hells Kitchen I regard as being pretty much compulsory reading for any four colour devotee.  One is Frank Miller and the other is, of course, Kevin Smith and Guardian Devil is the arc in which, in my humble opinion, the latter was at the height of his writing powers.  Ostensibly following the superhero trope and centred around the battle between good and evil, although on an apparently much larger, and very, biblical scale Guardian Angel transcends the parameters of its far less than humble origins to become something much greater and far bigger, yet remains an incredibly personal and emotional story. Charged with defending the world from a child who may or may not be the Anti-Christ, Daredevil is forced to question everything and everyone that he knows and has come to rely on as his sanity is pushed to breaking point and beyond  and his heart shattered by the loss of the one constant in his life. And as the walls close in around him, the lines between justice, revenge and the law become increasingly, and almost irrevocably, blurred.

Richard Rohan has achieved the near miraculous with this adaptation, as you can almost hear the pages turn as Jonathan Feuer’s noir flavoured, Phillip Marlowe infused portrayal of Matt Murdoch / Daredevil guides the audience through the story. Exploring the loss, personal nature and rediscovery of faith, in both the divine and the individual and enforcing the idea that just like there’s no such thing as a small hero, there are no small villains because everybody takes centre stage in their own life, Guardian Devil is that all too rare beast. A direct adaptation that’s just as powerful, thought provoking and exciting as the source material that it’s drawn from.  The cast and direction are exemplary, and if you close your eyes while listening to Guardian Devil unfold you can almost smell the hot asphalt, spent petrol fumes and the blood, sweat and tears of thousands of shattered dreams that fill the air of Hell’s Kitchen.  This, this right here, this is why Kevin Smith is one of the few authors to have ever made Matt Murdoch far more than the sum of his parts and was able to tell the story of the man who Matt Murdoch should and could be. Come dance with the Devil in the pale moonlight… Tim Cundle