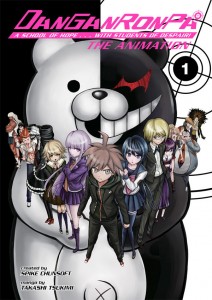 When Makoto Naegi is selected as one of the fifteen students to enter Hope’s Peak Academy, the most elite school with strong government backing, he feels honored even though he’s “normal”. The Academy is where the ultimate students of each field of study, hobby, or sport attend in order to help make them even better at, and hone, their chosen discipline. Yet, when Makoto enters the school grounds he wakes up some time later in an empty classroom with a letter telling him that the school year has started and that’s when his world is turned upside down. Yes, the fifteen students are there to study, but they’re also there to also kill each other. The goal of the school is to survival, and the only way to graduate is to kill another student and get away with it.

Danganronpa was a nice little surprise that I thoroughly enjoyed. At first it seems like a casual knock off of the all too common “Battle Royale” style scenario. But what sets this one apart, is that after a murder is discovered, the remaining students are put on trial and it is up to them to ascertain who committed the crime. If they come to the correct conclusion, the guilty student is punished. Yet if the fault is placed on the wrong person, all the remaining students will be put to death. Writer and artist Takashi Tsukimi does a fantastic job of translating the series that originally started out as a game and an anime, to page. While the characters are very much exaggerations of common stereotypes, some stick out more than others, which helps set some of the humor in place and prevents the series becoming too. Even though the basis of the series is straightforward, your curiosity is fed by what isn’t said, making you wonder what the true goal of the school is and what some of the characters are really hiding. And that’s what will keep readers coming back to find out what happens, and who will die, next. I know I’ll be back to find out… Jason Bonton