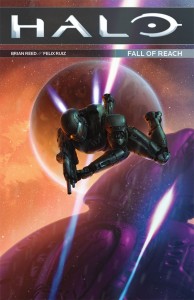 Dr. Catherine Halsey is looking for children with something special. Those who’s DNA that makes them stronger and quicker than the rest of the species. John (Master Chief) is the first of these children. Once found, all of the children are kidnapped from their homes and relocated to the planet Reach, where they are told they will be the first to go through the Spartan II program, a program that is not strictly “approved” due to its proposed high mortality rate. Through years of training John excels in every discipline, but at a huge personal cost, as he sees his friends and comrades fall during each mission he embarks on. Then the Covenant, a collection of aliens that seem to be on a crusade to wipe out all other lifeforms before them, appears. And their first target is the planet Reach.

While I knew first part of the story of Fall of Reach after reviewing the movie for this story, it ended before the actual fall of the planet Reach. This volume picks up where it left off and fills in the gaps about what was happening with Master Chief while the events in game Halo: Reach unfolded. One of the highlights of the story was the introduction of the A.I. Cortana and how her inquisitiveness, which helped lead the way to the first Halo encountered by Master Chief and the crew of the Pillar of Autumm, which incidentally, is where the first game begins.

If there’s one thing that the Halo series does well, it’s making those that read it want to know more. Like what happens between, and before, the games. While writer Brian Reed adapts the original novel well, it still has the same problems as the source material and that’s, primarily, the issue of the time gap between when the recruits were children to when they became teenagers. A lot of history is lost by not covering this, but it doesn’t take away from the story and as the tale continues, the book gets better. My one sticking point really in this book is the art, as when the action gets heavy a lot of it is seemingly lost in Felix Ruiz’s art. When the story calls for calm moments the art can handle the rough lines of Ruiz’s work but the action scenes unfortunately become a little too chaotic for my taste. Other than that though, Fall of Reach adds a nice slab of missing lore to Halo and humanizes, provides an identity for and gives a face to the series main character. Jason Bonton