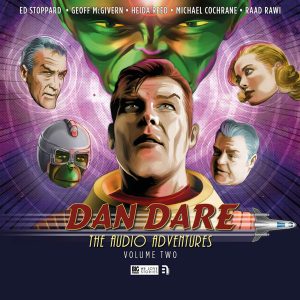 He’s back. Frank Hampson’s most famous son has returned and in this second series of his audio escapades, Colonel Dan Dare, Pilot of the Future, faces, fights the good fight against and ultimately defeats the Mekon and his allies to keep Earth and the Solar System safe from their nefarious grasp.  Picking up exactly where Volume One left off, with Dan, Peabody and Digby having rid themselves of the Mekon’s virus thanks to the clever usage of a teleportation device, our trio of plucky heroes head for Earth only to discover, in the opening chapter Reign of the Robots, that a decade has passed and in the time that they’ve “been away” their home world has been conquered by, with a little help from a mysterious ally, the Mekon. With Earth under alien control, Colonel Dare’s only course of action is to try and free the planet from Treen clutches and to begin the fight back against the alien menace that has trampled humanity under its green jackboots.

Having freed the world (no, it’s not a spoiler because, well, did you even think for a moment that he wouldn’t?), Dan, Digby and Peabody find out that space is much bigger and far more dangerous than they ever thought possible when they cross paths with the Mekon’s benefactor and the power behind the throne in Operation Saturn, the life and death second act in this series.  Then the grand finale, Prisoners of Space, throws Dare and his nemesis back into the arena and ultimately reveals the truth about the Treen race and humanities relationship with its galactic neighbours and the impact that the, often fractious, fallout from first contact has had on mankind’s development and progress. And it’s a more than fitting, and exciting, way to end Dan Dare’s latest series of adrenaline fuelled adventures.

While I am, and have been since childhood, a die-hard fan of Britain’s greatest square jawed, space hero, I am more than aware that he’s always seemed to be a product of the decade in which he was born as his, and his colleagues, attitudes were always firmly rooted in that era.  Which in our modern “enlightened” age, would have been a not inconsiderable problem where it not for the fact that Messer’s Brake, Chapman and Guerrier have reinvented this classic fifties icon as an everyman hero for the twenty first century, one who comes complete with his own set of personal baggage that makes him far more human, much more real and far more personable than he’s ever been. And the fact that the stories are very loosely adapted from some of Frank Hampson’s original ideas and use them as a rough launch-pad to rocket into clever, thrill-a-minute romps that are filled with “insider” Dare references and rammed full of action ensures that the needle on the enjoyment-o-meter goes from zero to maximum right from the off and stays in the the red for the entire duration, means that once you’ve strapped yourself in for the the ride, you’ll never want to get off. But the real star of the show is the villain of the hour, the yin to Dare’s yang, the Mekon, played once again with savage, unrepentant, vicious magnificence by Raad Rawi. If it were not for the fact that good always has to trump evil in Dan Dare’s world, thanks to Rawi, I’d be rooting for the Mekon of Mekonta every step of the way. The future is here…  Tim Cundle