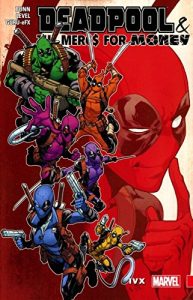 The mercs may be different, but the one thing that never changes is Deadpool. Let’s face it though, who’d want him too? Wade is, as Wade does and it’s a darn good job that’s the case, as Teenage Negasonic Warhead’s future, and that of the rest of the world, rests solely on his shoulders and the decisions that he makes in IvX. And as everyone knows all too well, Deadpool isn’t exactly great at making decisions. On the cusp of being forced to take sides in the conflict between the X-Men and the Inhumans with his new Merc “friends”, and with S.H.I.E.L.D. doing the big brother (that’s the Orwelian variety and not the familial kind) thing, the momentum gradually increases until both Wade and his only friend in the new Mercs For Money, the aforementioned Teenage Negasonic Warhead, are forced to make choices that would never appear on their list of “Top ten things I’d like to do today or any other day for that matter”.

IvX is told via two timelines, the present and five years in the future and thanks to the whole wibbly-wobbly-timey-whimey thing that helps super powered beings subvert the generally agreed laws of physics and linear nature of, well, time and Deadpool, Teenage Negasonic Warhead is able to do the right thing for herself, and just about every other living thing on Earth.  There is, as we’ve come to know, expect and love from Wade’s continuing escapades more violence, mayhem and destruction in IvX than our parents were led to believe there was at all of the early Sex Pistols show combined, but like all of the best Deadpool stories, it’s also bittersweet and tragic as the hero of the hour ends up, as he almost always does, alone and with only his tormented psyche for company.  As good as it sounds to you though (and it does sound good, doesn’t it?) the main arc isn’t the highlight of IvX. No, that honour belongs to the Spider-Man and his Amazing Friends pastiche which was originally featured in Deadpool Annual #1 that’s included in this tome, in which Wade replaces Pete and manages to get the latter’s friends to do all sorts of wonderfully horrible and nasty things to the Sinister Six.

The writing and artwork throughout IvX are superlative and as ever, easily exceed any and all expectations that you, I and anybody else might have. How could they not? I mean, come on, have you seen the creative team responsible for this book?  Those cats regularly smash it out of the park with everything that they do, and given Deadpool as their muse and the chance to carry on playing in his well-armed sandpit, each and every one of them makes sure that they’re on top of their game before limbering up and hitting twice as hard as they normally do. Which is really, really hard. Welcome to Wade’s world… Tim Cundle