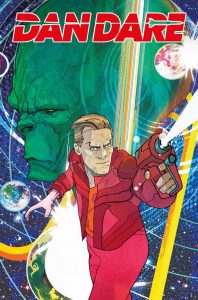 Has any character in the history of comics ever had such a checkered history as Dan Dare? Created, written and drawn by Frank Hampson , Dan Dare – Pilot of the Future appeared in the original Eagle comic from 1950 – 1967.  Despite flying a rocket ship and defending Earth as part of the Interplanet Space Fleet against the alien menace of the Mekon, Dan Dare looked like a standard army officer of the 1950s, peaked cap and everything.  He spoke and acted like you’d expect a British Officer of the 1950s to speak and act.  He was the personification of the stiff upper lip and was really popular, even spawning a daily radio serial of his exploits that aired on Radio Luxembourg for most of the 50s.

Dan Dare then reappeared in 1977 in the hallowed pages of 2000 A.D.  before moving back to the re-launched Eagle comic in 1982 until 1994.  He’s appeared in various other short lived comics such as Revolver and has even had his own mini-series published by Virgin Comics.  The list of creators that have presented Dan Dare’s adventures reads like a who’s who of the comics industry.  Pat Mills, Dave Gibbons, John Wagner, Grant Morrison and Garth Ennis as well as many others, have all taken a turn with the character.  Now Peter Milligan’s stepped up for a go.  Probably best known for his work on Batman, he’s done a credible job on everything from Shade the Changing Man to Justice League Dark.

With so many creative talents involved in the Dan Dare story, it’s hardly surprising that he’s had many incarnations that have drifted somewhat from the original stiff upper lipped English officer.  He’s gone from that, to a super hero with a cosmic claw like device, to a political dissident and freedom fighter to a time traveller to a high-tech space marine and back again.  Poor old Dan has gone through near constant re-invention since his original incarnation came to an end.

Yet, it’s his initial incarnation that seems to resonate most and would be what the general public would think of if you asked them.  It’s how I think of Dan Dare, and I read the 1970s 2000 A.D. stories where Dare traveled the universe in a tight fitting super-hero style costume with the cosmic powered Omega Gauntlet (or whatever it was called).  Despite that, I still think of Dan Dare as a 1950s English gentleman and officer, in an army trench coat, peaked cap and holstered pistol.

So what sort of Dan Dare do you get in this new series from Titan?  Truth to tell, it’s hard to say from this initial issue.  The problem is that the story is set in the difficult middle ground between adventures.  Basically, 5 years ago,  Dan Dare’s arch nemesis the Mekon hypnotised Earth’s population into voting him in as President.  Dan and his trusty band of fellow adventurers (long term fans can relax, Digby and Prof Peabody are present and correct) overthrow the pesky alien and he is imprisoned on the Moon.  He now spends his time growing vegetables.  As a result Dan and company have not much to do, with galactic menaces inconsiderately leaving Earth well alone.  Dan himself is bored and is spending his time writing tedious reports.  Just as it dawns on him that he actually misses the Mekon’s evil ways, an unknown spaceship decides to blow up Neptune’s biggest moon, Triton, before heading on its way to Earth.  It’s destined to arrive in issue 2, obviously.

Visually, this depiction of Dan Dare I found to be quite bland.  Not the art itself, which is perfectly lovely, but the depiction of Dan himself.  He just doesn’t stand out enough from the rest of the cast.    I think that maybe it’s the lack of a peaked cap. Peabody’s spot on though and the rocket ships have a delightfully retro look.  The Mekon has his shrunken body and huge melon head as per normal and even has his levitating bowl for transport.  But Dan himself I found to just look like ‘some guy’.  Less Dan Dare and more Gary Generic.

First issues are usually tricky to review as they have to introduce the main players and set up the groundwork for the stories to come.  We all know the meat comes in issue 2.  So, other than minor quibbles with how Dan himself looks, this issue does its job.  The characters are introduced  and a suitable threat and mystery is lined up for issue 2.  It’ll be worth checking out, if only to see if the Mekon can salvage his marrows. Paul Ferriday