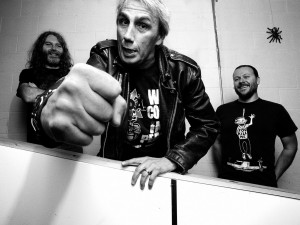 D.O.A. is starting work on a new studio album. The band started in 1978 and is known as Canada’s punk pioneers. Canada’s godfather of punk: Joe Shithead Keithley originated the term ‘hardcore” back in 1980 and the band pushed the term into the common vernacular with their landmark album Hardcore 81. Now the band needs funding to help pay for their new 12 song studio album HARD RAIN FALLING. Joe with the help of his notorious rhythm section, Paddy Duddy (drums) and Mike Hodsall (bass) will record an album that harks back to the basics of early punk. It will contain fast, short, frantic songs that dive deep into urgent issues of out time: racism, war, gangs, oil pipelines and environmental degradation.
We have all sorts of unique ways to particpate, there are a ton of different packages: Signed CDs, signed D.O.A. w/Black Flag posters, a bobblehead of Shithead, D.O.A. hoodies and tshirts, D.O.A. w/Minor Threat posters, Hardcore 81 posters, D.O.A. guitar and bass played on the bands’s 2014 China Tour, signed drum skins from the album recording, Shithead’s jean jacket, stickers, Joe’s Green Party and NDP campaign lawn signs, a download of the new album and maybe even D.O.A. playing in your basement
To check out the album!
And thanks a million to all the people who have supported D.O.A. over the years.