Warning: preg_match() expects parameter 2 to be string, object given in /var/www/vip4/sites/vip6102689/httpd/htdocs/wp-includes/formatting.php on line 4866
 ALL OUT WAR: Full Info And Trailer For Impending Dying Gods EP Released - Mass Movement
x
Spread the love 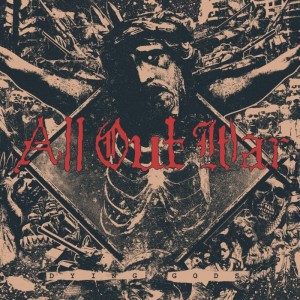 New York crossover quintet, ALL OUT WAR, has just released a visual trailer for their impending Dying Gods EP, offering some insight into what the henchmen have captured on their anxiously anticipated new works. Additionally, the record’s track listing has been released, offering the titles of the five new original tracks and two influential cover tracks included on Dying Gods, and preorders for the album have been made available in multiple formats and options via Organized Crime Records.

Dying Gods brings ALL OUT WAR‘s first official release since their 2010-released Into The Killing Fields LP, delivering nearly a half hour of the band’s most merciless material in years. Dying Gods brings forth five new original hymns which surge with the unmistakable groove-infused metallic punishment which elevated the band from a local favorite to international kingpins in the mid-1990s, the attack recalling the by-the-throat approach of their seminal For Those Who Were Crucified LP. Closing out the new release, ALL OUT WAR pays homage to some of their collectively influential acts, first with a pulverizing rendition of Amebix’s ritous anthem, “Arise,” followed by some classic sacrilege with Carnivore’s “God Is Dead.” With thunderous production, Dying Gods was engineered and produced by Steve Evetts (Hatebreed, Turmoil, Buried Alive, Suicide Silence) at West West Side Studios in New Windsor, New York, and mastered by Alan Douches from West West Side, its brutal cover art and design by Alexandre Goulet.

As Organized Crime Records prepares for the release of Dying Gods on June 23rd, 2015, the label has unleashed a video trailer for the EP, leaking the first audio samples from the record, cut with footage of war and crimes against humanity and fan interaction with ALL OUT WAR live which is just as brutal. View the new trailer at THIS LOCATION.

Preorders for Dying Gods have also been posted, including multiple package bundles on a variety of formats. The CD version comes with an exclusive bonus download of three tracks from the unreleased 1993 demo. The album will also see three vinyl pressings, including blood clear red, scorched earth sand tan, and smoke of destruction clear and black mix with bonus screen printed cover art by Dave Quiggle, all including a digital download code. Check out the options via Organized Crime Records’ official merch store HERE and through ALL OUT WAR‘s store HERE.

ALL OUT WAR has confirmed a multitude of 2015 performances, including Rain Fest in Seattle, Washington the weekend of May 22nd, followed by a home turf record release show which was just booked for June 20th in Poughkeepsie, New York. They also return to This Is Hardcore in Philadelphia on July 26th. August sees the band raiding Europe for a nine-city takeover, the Dying Gods Europe Tour 2015 running from August 7th through 15th, and includes performances at Still Cold Fest in Germany, Ieperfest in Belgium, and the massive Motocultor Fest in France. Also just announced, early September will see ALL OUT WAR taking part in Hearfest in Gatineau, Quebec.

Now nearing the band’s two-and-a-half decade mark, ALL OUT WAR has assaulted the masses with their metallic hardcore aggressionsince 1991 through a multitude of recordings, including a pile of singles and EPs, an LPon Germany’s Gain Ground Records, and four subsequent LPs on Chicago’s Victory Records. Featured is their trademark social commentary on such subjects as political and religious hypocrisy as well as social apathy of a materialistic population. They attack the relevant subjects of corruption of organized religion, ecocide, and the degradation and exploitation of the weak, set to a soundtrack appropriate for the end of days. With an unrelenting assault of the mid-’80s German thrash scene colliding head-on with the crossover sound of Carnivore and the Cro-Mags, the band’s recorded arsenal and waves of worldwide touring has led them to become a respected staple act for metal and hardcore fans everywhere. After several years off the grid, in 2013 ALL OUT WAR came crushing back with the reunited For Those Who Were Crucified-era lineup and laid waste at both This Is Hardcore Fest and 2014’s A389 Records Bash. The momentum has been growing ever since. In 2015, ALL OUT WAR returns with Dying Gods. You have been warned.