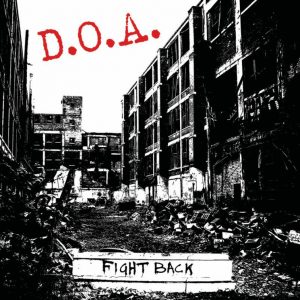 Most folks from my middle aged and rapidly heading toward the grave generation of punk rockers will tell you that the first band that lit a fire inside them, made them think on an increasingly individual and independent level and inspired them to become politically active were the Dead Kennedys.  But I’m not most people, and the records that transformed the way I thought and saw the world were War on 45 and Bloodied but Unbowed and thirty two years after they first rearranged my brain and turned it inside out, I still love D.O.A.  Heck, there isn’t a week that goes by when I don’t spin one of their albums, sing-a-long with Joe and try to figure out how to change the world for the better.  I’m a sucker for D.O.A. and a die-hard Joey Shithead fanboy and I’m not afraid to admit it. I always have been and I always will be.

Being a D.O.A. mark hasn’t always been an easy road to travel down though, as over the three decades I’ve been on it,  they’ve been responsible for their fair share of clunkers and they’ve called it quits at least three times only to pop back up a year or two later. Although, unlike most bands it isn’t the money (as there as easier and less stressful, but nowhere near as rewarding ways to earn a living than being a member of D.O.A.) that brings them back, it’s the world making Joe angry as hell, backing him into a corner and forcing him to stand up and, well, Fight Back, against all the woe and misery that brings D.O.A. back time and time again.

And this time, they’re back with a vengeance, they’ve really got the bit between their teeth and they’re raring to get out there and do whatever they can to turn things around and make them more bearable. Fight Back is pure vintage D.O.A. and is full of instantly memorable tunes, all of which are led and fuelled by Joe’s snarl and stuttering guitar. A throwback to the D.O.A. sound of the mid-eighties, Fight Back, the bands seventeenth studio album, smashes everything else that they done for the last two decides into dust and is, truth be told, the best record that they’ve released since Festival of Atheists. Sure, it’s D.O.A. by numbers, but that’s what exactly we* want from Vancouver’s finest, because when D.O.A. drop the gloves, are firing on all cylinders and on top form, like they are on Fight Back, there are few bands who can even come close to touching them. D.O.A. just put the biscuit in the basket. So crack a cold one, raise it high and sing-a-long with Joe and the boys… Tim Cundle