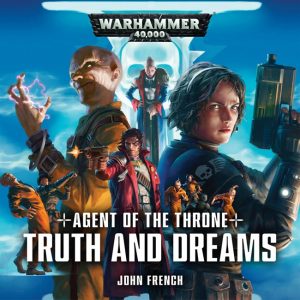 Warhammer 40,000, beginning as a gaming premise from Games Workshop, has grown up in the last decade, expanding into a range of storytelling media. The Black Library audio dramas conjure us a cosmos that has all the richness of Ye Olde Gaming Premises of wizards and warriors, translated through a hardcore science-fiction language into empires of chaos and order, of postmodern misanthropic cool and hardness that appeals to geeks of many stripes. In a way, they combine science-fiction languages with fantastical premises, to give us the best of both genres.

The backdrop to the stories is phenomenally huge – the further into the background of Warhammer 40,000 you go, the more complex and intense it gets, but suffice it to say we’re in the far future, there’s been an event called the Horus Heresy (like, sooo Google it, newbs!), and now there are empires, armies, aliens, wars, warps, inquisitors, a god-emperor and what would in older fantasies be thought of as mages – humans who can reach into other dimensions and bring bits of them back, to do all kinds of interesting things. Here, they’re not mages but psykers, individuals with power beyond anything material.

Within that setting, Agent of the Throne : Truth and Dreams is a cracking ye olde hero-quest with plenty of oomph, a fair chunk of horror and a good heaping handful of mystery too. Our hero, Ianthe, played by Colleen Prendergast, is a veteran of many military engagements, a servant of Inquisitor Covenant (again, Google if you really feel the need to, but Big Boss On Sort-Of The Side Of Good more or less gets you there), and Truth and Dreams is the second audio of her adventures written by John French – check out Agent of the Throne:  Blood and Lies for the start of her story.

This time, Ianthe and a troop of her fellow long-servers are sent after a psyker with dangerous powers over the minds of people he can touch – Silas Norn, played with a powerful, playful vindictiveness by Andrew Wincott. Ianthe’s role is two-fold in the story – we hear her live in action, chasing after Norn, and from some point in her future, and rather more wise and cynical, we also hear her narrate and pontificate on her adventures from a point of hindsight. That makes for a lot of Prendergast, but you can’t get too much of a good thing here, and she splits the mood between young Ianthe and older Ianthe well, to give us a clear audio landscape which flows over the cuts between the ‘present,’ the ‘future’ and the ‘past’ of Ianthe’s lifetime, smoothing our path through the drama as she goes.

While on the surface, we can make the comparison to a simple old-fashioned hero-quest after a dark mage, French gets a lot of layering out of his hour of run-time, and we learn a lot – about Ianthe’s previous missions and a friendship formed with one of her team, and perhaps most significantly, about her memories of her father and how they may not be all they seem to be. In a story involving a mind-controlling psyker, that’s significant, but French seems to be building up the discrepancies around Ianthe’s past and her own understanding of it as a whole, and possibly the most interesting, story-thread across the Agent of the Throne audios.

There’s solid support for Ianthe in a couple of returning team-mates, Cull, the maker of necessary deals, played by Steve Conlin, and the gloriously-named Artabanus, Ianthe’s cyber-pal, played by Cliff Chapman. Cull in particular has a solid chunk of purpose here, getting Ianthe in and out of several scrapes on her way to confront the psycho psyker. And it’s important to note that there’s texture in that chase – there’s sacrifice, and death, and the use of humans as puppets which you’d expect from a dark psyker who can mess with minds. But there’s also a touch of circumstantial horror when it becomes clear that Norn, Ianthe and Cull are trapped in a giant prison. A giant prison with a very particular routine that adds an air of kill or be killed free-for-all to the hunt for the psyker.

Most impressive in both the writing and the performances though are scenes that put Ianthe and Norn in a face-to-face battle for their minds and their lives – Wincott is everything you could hope for and more in those scenes, spiteful, superior and serpentine as Norn whispers uncertainties into our hero’s head, unpicking any cohesion in her memories of her past. It’s in those scenes that Norn comes into his own and you really understand why Ianthe and Co are tracking him down. It’s also in those scenes you can get pretentious if you want, and see Norn as a dementia-avatar, stealing who his victims were and making them his own, taking their memories to pieces in the process of claiming control over them. It would be unfair to spoiler you with the ending, but suffice it to say a late introduction of a new character played by crowd favourite and universal audio-helper Beth Chalmers will also elevate the prison sequences into something to keep an ear out for in future dramas in the series.

Truth And Dreams, for all it’s a second instalment in a building adventure, does enough good work in setting the world of Warhammer 40,000 in front of you that even if you’re brand spanking new to that world, you can use it as your introduction and not suffer unduly by a lack of broad universal context. It hooks you right in to Ianthe as a character and the questions, the gaps, the lies and the overlaps in her memories of who she is, meaning you go with her easily through the adventure, particularly helped by the slices of her later self and the harder, more cynical viewpoint she attains, and come out at the end wanting more from French, Prendergast and the gang.

There is truth, and there are dreams. After Agent of the Throne: Truth and Dreams, you may not be quite so sure you know which is which any more. Tony Fyler