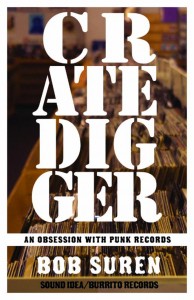 Crate Digger: An Obsession With Punk Records – Bob Suren (Microcosm Publishing)
A unique and personal journey through Suren’s immersion in the punk scene and how his obsession with collecting rare punk vinyl impacted every aspect of his life from personal relationships to career choices to playing in a band (Failure Face).

Unlike many musical memoirs Suren talks very little about the actual records themselves, instead linking significant releases to his frame of mind at the time or a particular life event, such as the opening of his record store and distro ‘Sound Idea’. The anecdotal, almost conversational form of autobiographical writing is quite unusual, and although it takes a little bit of getting used to (at times it seems almost too personal), it makes for an interesting read, and one which I’m sure many of us who, like Suren, became obsessed with the punk/HC scene, and subsequently made life changing decisions based on that preoccupation, can relate to.

Crate Digger highlights the International nature of punk and how the author developed friendships (and animosities) with musicians and vinyl traders across the world, from South America to the UK (with Worcester stalwarts Terrorain getting an entire chapter to themselves, courtesy of Suren’s friendship with vocalist Patrick Lawlor). Ultimately Crate Digger paints a realistic picture of both the positive and negative elements of an obsession with collecting things, and of the redemption one can find in being part of a bigger scene. Ian Pickens

Books
One comment to “Crate Digger: An Obsession With Punk Records – Bob Suren”