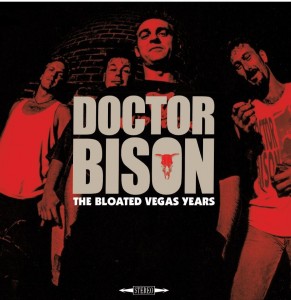 Doctor Bison – The Bloated Vegas Years Vinyl/CD (Boss Tunage)
Sublimely melodic rock from the Anglo-Welsh combo comprising of former HDQ/Leatherface guitarist Dickie Hammond and The Abs’ Baz and The Rev (‘Grease Your Ralph’ anyone?). Consisting of re-mastered versions of the band’s first three EPs. With the usual excellent Boss Tunage packaging (lyrics, pics and an a nice little intro to the band’s formation), this is a decent taster to a band that may have slipped under your radar during the 90s, due to the onslaught of American Pop/Melodic Punk. As you would expect combining Hammond with the Abs resulted in a highly melodic style, which I would shy away from describing as Punk – leaning more towards a straight forward rock sound. In many ways DB stand as a primer for the wave of melodic British punk bands that followed, such as Shutdown and Vanilla Pod. For me personally it’s a bit too melodic, but if you like your punk/rock with a large slab of tuneful ness then check it out. Ian Pickens