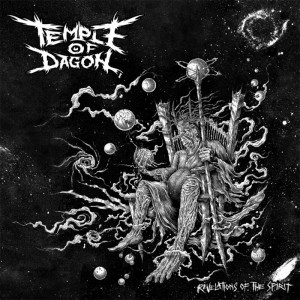 Temple Of Dagon – Revelations of the Spirit (Black Voodoo)
If Temple Of Dagon had been present in the same yurt as Conan when he was questioned about the best things about being alive, and had been asked the same question, their answer would probably have been something like: ‘To crush every other band; see them driven before you and to hear the lamentation of the scene’. Then, to underline the point, they would have done just that by playing ‘Revelations of the Spirit’. A monstrous fusion of Amebix, Deviated Instinct, His Hero Is Gone, Tragedy, Hellbastard and ‘Drop Out’ era 16, Temple Of Dagon flay the flesh from your bones with their doom laden, venom drenched riffs, opening gateways in your mind to places where no mortal should travel. All this whilst offering praise to unholy things from beyond the veil with the devastating fury delivered by their rhythm section and barked, howling vocals that beg favour with, and from, the elder gods. This is the sound of celestial destruction made flesh, and I can’t get enough of, and can’t stop playing, this glorious record. Ia! Ia! Temple Of Dagon fhtagn! Tim Mass Movement