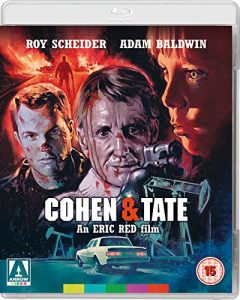 Film often reflects the period in which it was made and if you cut Cohen & Tate open it would bleed the nineteen eighties. Made at the tail end of a decade in which greed became good, selfishness became the main motivational force in society, the Cold War continued to rage and the rise in popularity of the anti-hero in cinema grew exponentially, Eric Red’s debut feature is a bleak, nihilistic, noir tinged thriller in which the expected tropes and stereotypes of the genre are tossed aside in favour of something altogether darker. It’s grim journey begins with a couple of hitmen murdering the parents of the nine year old witness to a mob murder, who then kidnap the child in order to take him to their employers so that they in turn can discover what it was he saw before disposing of him. Unrelenting and savage, the film pits the child against his captors, who gradually turns them against each other in an effort to escape the fate that befell his parents and is a masterclass in slow burn manipulation. Highlighting the differing attitudes to their “job” that exist between the aging, world weary Cohen and the fresh faced, psychotic Tate it centres on the growing tension, fed by their reluctant ward, between the pair that gradually escalates until it erupts in an orgy of brutal violence that puts paid to any dreams either man had about emerging from their assignment unscathed.

While Harley Cross, as the young witness Travis, takes centre stage in a convincing and, at times incredibly emotional performance, Roy Scheider as Cohen, and Adam Baldwin as Tate are the real powerhouse that drives Cohen & Tate. As the film focusses, for the main part, on just three players, its success is entirely dependent on their ability to bring the characters to life and make the audience believe in them, which they do in magnificent fashion. While Scheider arguably reached the peak of his fame in the seventies with the French Connection, Marathon Man and Jaws, his ability as an actor continued to mature and develop throughout his career, and the everyman quality and raw charisma that he possessed in abundance shines through in every frame of this film, making is one of his finest, unsung moments. Taking its cue from seventies road movies like Vanishing Point and Dirty Mary Crazy Larry, but adopting a more intimate and pragmatic approach to storytelling, Cohen & Tate doesn’t adhere to the age old Hollywood vision of the “Happily Ever After” ending, opting instead to reward its audience with a shocking, and given the nature of the film, far more honest finale. They sure don’t make them like they use to… Tim Cundle