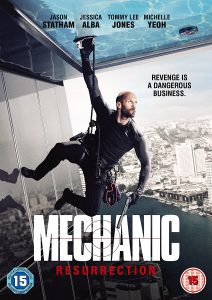 Sequels can be a tricky business. Get them right and you’re almost guaranteed a successful franchise and the doors of the film industry burst open with opportunities aplenty for the cast and crew. But get them wrong and very often it’s not only the film that tanks, but the careers of everyone involved in the production can also end up in the doldrums. However, if you’re looking at launching a potentially popular series of films, then the man you should always keep at least one eye on is Jason Statham. The man is the king of the action franchise, and rightly so. Don’t believe me? Okay then, look no further than The Transporter, Crank and Expendables series. That’s right, he was leading the charge in all of those films, and while none of them could ever be accused of reinventing the wheel, they were, and are, high octane, action heavy thrill rides in which the corpses of bad guys are strewn in a bloodied and battered piles, fists and kicks fly and the (sort of) good guy always comes out on top. Statham specialises in playing brooding, thoughtful anti-heroes and loners who wear the weight of their past misdeeds on their shoulders and while not exactly trying to atone for their histories, are more than willing to utilise and incorporate everything that they’ve learned from them in order to inevitably, and eventually, do the right thing.  And now, he’s returned to the Mechanic

The first film was an intelligent, tightly focussed thriller that appeared half a decade ago and was a loose remake of a Charles Bronson film from the early seventies that bore the same title. Reviving Arthur Bishop, the assassin who specialises in making his kills look like accidents, in Mechanic: Resurrection, Statham’s character is subtly reinvented and given a past that changes the direction of the film from the slow burn original, transforming it into something more akin to the Transporter series, while keeping the familiar spirit of the cat and mouse game of double cross that worked so well in the original alive and well. Coerced, via the kidnap of one of the only people in the world he‘s come to care for,  into committing a trio of seemingly impossible “hits” by a shadowy figure from his past, Bishop is forced to return to a life that he thought he’d left behind. But Arthur being Arthur, he isn’t about to let anyone get the upper hand and sets in motion a plan that will not only free and him and his lover, but will forever cleanse him of the time in his life that’s holding him to ransom. As I mentioned earlier, Jason Statham has never set out to offer solutions to any of life’s problems (unless those answers manifest themselves in a haze of copious amounts of bloodshed and broken bones) and he’s not trying to reinvent the wheel or hammer a square peg into a round hole, but what he does do is deliver exciting, enjoyable movies that are crammed full of stunts and up close and personal, hard-hitting, bruising combat that pack a perfect combination of adventure and plot. And that is exactly what Mechanic: Resurrection does. It ticks all of the Statham boxes and a few more besides and has all of the requisite ingredients to kick start another hugely successful franchise for the king of action cinema. Killing’s his business and business is good… Tim Cundle