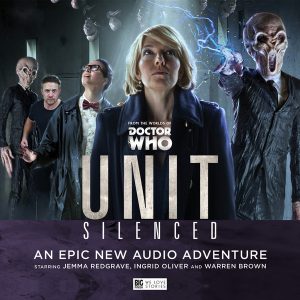 Big Finish’s latest audio adventure featuring our favourite modern day take on Dad’s Army sees Kate Stewart and the crew facing off against the Silence. Silenced also explicitly follows on from the events of the TV episode Day of the Moon, making this the most direct tie-in with Doctor Who to date.

And so, decades after their defeat by the Eleventh Doctor, the Silence prepare to rise once more against humanity. Naturally, there is no record of the presence of an alien species known as The Silence on Earth, UNIT has never engaged with hostiles capable of editing themselves from observers’ memories, there is no evidence that such an opponent, if real, is planning world domination, and UNIT are absolutely NOT in mortal danger. So it’s all quiet on the Western front and for once Brigadier Stewart has no immediate threats to concern her. Or so she believes, until Sam Bishop returns from leave and notices things aren’t quite as they seem. Soon he’s on the trail of an elusive enemy, while Kenneth LeBlanc and his controversial political movement gather momentum, and one UNIT team member isn’t quite himself.

Along with established fan-favourite Osgood, the most active member of UNIT in this instalment is Lieutenant Sam Bishop whose initiative and youthful earnestness are a throwback to classic Who UNIT regular Captain Mike Yates. Many long-time fans will recall that Yates was prey to falling victim to mental manipulation, and here this tradition is continued thanks to another new character, Captain Josh Carter. Of all the UNIT officers, though, it’s Colonel Shindi who is the most well-rounded. Whether taking part in an homage to Alfred Hitchcock’s Rear Window, pondering the implications of having alien technology in his body, or brushing aside questions about his health, there’s clearly much more to him than a uniform.

Reporter Jacqui McGee was introduced in a previous UNIT adventure as a thorn in UNIT’s side, but by the end of Silenced she’s almost a de facto team member. Based on Kate’s observation that there’s precedent for UNIT recruiting journalists, this relationship seems likely to expand in future stories… But this may not be an altogether positive move. She certainly serves a valuable plot function but, along with LeBlanc, her character is one of the weakest of the story. LeBlanc himself was possibly intended to satirise some current US and UK political figures, but he is written and played so broadly that the jokes fall a little flat and the caricature distracts somewhat from a story that for its first three episodes is an effective investigative thriller. Unfortunately, outside of the presence of the Silence, the fourth episode in the set’s events feel only tenuously connected to the previous parts. The set-up is promising, but the plot doesn’t mesh well with what preceded it, so the story loses some of its cohesion in the process. There’s a memorable reference to David Bowie’s Ashes to Ashes and a clever nod to UNIT’s most recent TV appearance, but because the first three parts mesh so well together they throw the final episode into stark relief.  Don’t let that put you off though as final part niggles aside, let’s remember that characters remain the key attraction in all the corners of the Whoniverse, and in that respect this release in the ‘UNIT’ series delivers nicely. This is a strong entry in the series, and definitely one for anyone who likes a good old-fashioned conspiracy story. Bex Ferriday