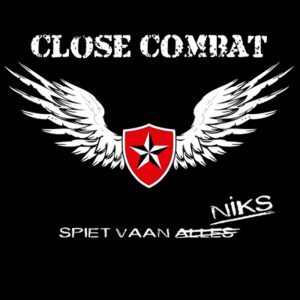 This name is a bit of a blast from the past, I remember releases from these Maastricht boot boys from around 10 or so years ago and this is the first sign of life for a long time. Here we have nine new songs from these M-Town Rebels, all sung in their local Mestreech dialect which definitely makes them stand out from the crowd. Overall this is a lot tougher than I expected, as the boys lay down the law with a tight blend of streetpunk, hardcore and metal. The songs feature big oi! choruses that you’ll find yourself singing along to whether you understand the words or not, whilst the verses are delivered almost hardcore style along the lines of fellow countrymen Tech 9 or at times Paris’ darkest Kickback. There is a huge metal/ rock influence in the songwriting and guitar melodies, taking touches of bands like Troopers, Badlands or even Iron Maiden and putting them through the M-Town mixer. Lots of duel-guitar melodies, interspersed with acoustic passages and solid riffing. I love the blend of the hard verses with singalong choruses, reminiscent of the likes of Discipline or Toxpack. Close Combat have numerous weapons in their arsenal and as the album unfurls you start to realise how much work has gone into crafting these songs with little touches such as using a children’s choir on songs such as  De Voeste Hoeg and Boe Is Die Stad. This is so much more than a new street-punk album, it is a collection of songs that deliver on many levels and is a record well worth checking out. Tom Chapman