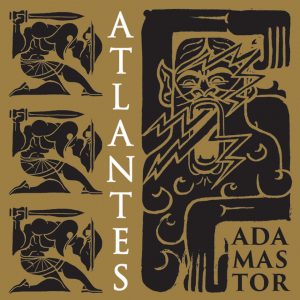 When you think of an oi! record you might assume it’s going to be a disc rammed with tales of football, drinking, running down the backstreets and that kind of caper. But there have also been oi! and punk band that prefer to introduce an air of mysticism into the look and sound. Blitz is an obvious example, but bands like The Templars, Battle Ruins or The Transitions and have taken their lyrics, musical style and overall presence down a very different path to the textbook oi style. This is the second EP from the mysterious sounding Atlantes. This is actually a two-man project between Rattus (from the Portuguese band Albert Fish and others) and Victor (from the French bands Lions Law, Rixe etc.) so it is definitely a project rather than a full-time band. But projects often give musicians a chance to explore uncharted waters and try out something different and that is the case here.

Atlantes is based in the same tradition as the bands mentioned earlier, perhaps not surprisingly given that Lion’s Law have also delved deep into the history books for their song and artwork subject matter.

Musically Atlantes is also that bit more “avant-garde” than you might expect, but then again especially in France you have bands such as Syndrome 81 and Litovsk that also forge their own musical path within the genre. All three songs on here are carefully crafted, powerful blasts of dark music and are well worth a listen. A lot of detail has gone into the presentation too, and this 7″ is served up in a super-thick gatefold sleeve with an extra lyric sheet and thick vinyl. Clearly a labour of love and the result is an all-round success. Tom Chapman