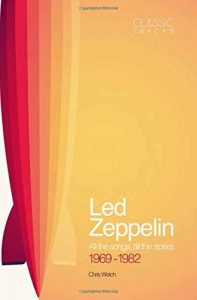 In ‘Led Zeppelin – All the Songs, All the Stories 1969-1982’, acclaimed rock scribe Chris Welch has written a comprehensive analysis of Led Zeppelin’s recording catalogue during their 13 year career.

Having toured with Zeppelin during this period Welch is ideally placed to provide a thorough exploration into the origins of the songs, their development and subsequent release on the band’s original 10 albums, and the band’s post breakup releases from 1980 -2009.

Interspaced with tales of life on the road, and in the studio Welch discusses the characters and stories that influenced both the music of Zeppelin from their take on American Blues (on songs such as ‘I Can’t Quit You Baby’ and ‘The Lemon Song’ from Led Zeppelin I & II  respectively), through the traditional folk infused tunes of Led Zeppelin III (‘Gallows Pole’) , the early foundations what came to be known as Heavy Metal on Led Zeppelin IV (‘Black Dog’), to the funk of ‘The Crunge’ and the cod reggae of ‘D’yer Maker’ on  1973 release ‘Houses of the Holy’ along with the Tolkien, Celtic and Viking lyrical inspirations. In fact reading through Welch’s work it’s easy to see why Zeppelin had such a big influence over a wide range of artists that followed them due to the sheer eclecticism of their work.

The text contains all the usual elements of this type of book – tracks lists, times, writing credits and chart positions, bolstered by quotes from the band and their entourage, in addition to Welch’s personal experience with Page, Plant, Bonham and Jones. The anecdotes definitely add to the listeners understanding of the songs, particularly their swing to a more folky style on Led Zeppelin III following Page and Plant’s sojourn to Bron-yr-Aur in Snowdonia where they “….spent evenings around log fires, with hot pokers being plunged into cider”, the explanation of the esoteric graphics adorning the cover of the fourth Untitled album and the string of bad luck that plagued the band from 1977 to Bonham’s tragic death in 1980. Although overwhelmingly positive in his appraisal of the band, Welch doesn’t shy away from some of their musical/lyrical ‘misses’ or the controversial question of their alleged appropriation of certain songs/riffs by other artists (mainly traditional US Blues artists), although he definitely downplays it.

Overall ‘Led Zeppelin – All the Songs, All the Stories 1969-1982’ is a nicely packaged and well written summary of one of the world’s most successful and influential rock bands and the ideal companion for revisiting those classic albums. Ian Pickens