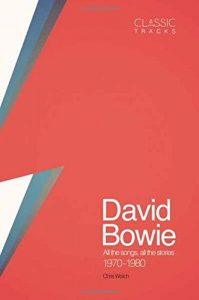 Using the same format as ‘Led Zeppelin – All the Songs, All the Stories 1969-1982’, Welch documents the chameleonic Bowie’s recorded output during what some would argue was his prime.

Detailing the cultural events and music that defined the time in which Bowie recorded his seminal works from ‘The Man Who Sold The World’ to ‘Scary Monsters’, the book very much captures the zeitgeist of the 70s – an decade of sexual ambiguity, musical experimentation and overall decadence in which Bowie was very much at the forefront.

With a slight deviation on the structure in his Zeppelin tome, Welch eschews the individual details of the songs and provides the salient information about the overall album (release dates, musicians, Production credits etc.) proceeding to give a much broader account of the historical context of the tracks and the background to the recordings than he does in the Zeppelin effort, which all makes ‘David Bowie – All the Songs, All the Stories 1970-1980’ a generally more readable book with a more cohesive feel.

An excellent primer for new Bowie fans wanting to investigate his earlier work and a thoroughly enjoyable read for older fans. Ian Pickens