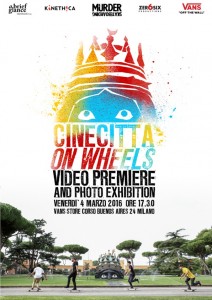 A SKATEBOARDING JOURNEY THROUGH THE CINECITTA’ FILM STUDIOS

Rome is a beautiful, diverse city. Within a 30-minute long subway ride, between big residential buildings and the ancient roman ruins of the Appian Way, you can enter Cinecittà, one of the most old and active film studios of the world, where people work to create magic, bulding ancient cities, submerged submarines, snow covered squares, underwater landscapes.

The rationalist architecture of the film studios founded in 1937 hosted not only the great classics of italian cinema, but some of the greatest international masterpieces that turned it into the ‘Hollywood On The Tiber’. The magnitude of the available spaces and backlot, the amazing craftmanship of the local cinema artisans, made it the best place for filming Cleopatra, Quo Vadis, and in recent times, U-571, Gangs Of New York, The Life Aquatic With Steve Zissou, Everest, Ben Hur, Zoolander 2.

Skateboarders are curious, creative types. Every surface, every architecture they encounter, inspires new tricks and lines. A place so rich in film history was a virgin territory that could be explored for the vey first time.

Murder Skateboarding teamed up with Inti Carboni, a filmmaker with a old school skateboarding background, who wrote and directed a five minute short film that portrays the skaters discovering the magic of filmmaking, of this exceptional location where masters like Martin Scorsese, Francis Ford Coppola, and Wes Anderson, made their films.

The Murder team riders will skate through the Rationalist architecture of the Factory of Dreams, as Fellini used to call it, riding from the Medieval city of Assisi, to the 1930s streets of New York City, to a full-size replica of Ancient Rome, on a journey between reality and fiction, where time and space bend around the magic of movie making.

The short film was produced by Murder, Kinethica and Zerosix Productions.

It was shown as a preview at the Berlin fashion week at Bright Trade Show.

Cinecittà On Wheels will be screened in Milan, at the Vans flagship store of Corso Buenos Aires 24, on friday March 4th, from 17:30 on.

It will be released officially online, on Monday, March 7th on