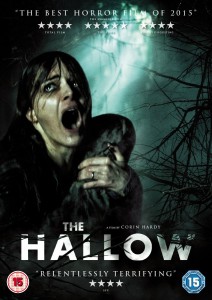 A very promising debut from director Corin Hardy, who more than proves he can keep an audience gripped from start to finish, ‘The Hallow’ is a neat twist on the cabin in a haunted woods trope. In this instance the woods are in rural Ireland, and they are haunted by gnarly wood nymphs who seem to take great delight stealing children and injecting a parasitic black goo into people through their eyeballs. They are tolerated by the surly locals, who want to maintain the natural order of things but have learnt the hard way to keep their kids out of the woods after sunset.

Into this uneasy truce walks a less-than-welcome conservationist and his family, who soon find themselves under siege and fighting to keep their young son from the clutches of the woodland demons. If it sounds like a dark adult fairy tale, that’s because it basically is, but it’s played with enough grit and earthy grime to convince, and easily holds its own against much bigger budget fare, mainly due to some great performances and its well-pitched, understated atmosphere of relentless dread.

The creature effects, when you finally see them, are more than adequate, and the modest action set-pieces are breathlessly tense, helping ensure that ‘The Hallow’ joins that beloved list of modest underground classics (think ‘Dog Soldiers’, ‘Pumpkinhead’ et al) that genre buffs return to again and again because they are so much more satisfying than mainstream teens-in-peril mundanity. Ian Glasper