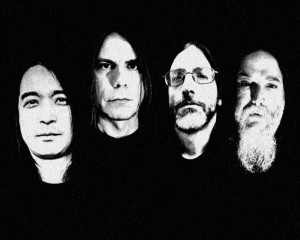 CHURCH OF MISERY have confirmed details of their sixth studio album, entitled And Then There Were None.  The record was created with a brand new line up, and will see a release via Rise Above Records in March 2016.

And Then There Were None, is a blood-soaked trip through homicidal hell, with songs inspired by killers both infamous and obscure. But while the murderous inspiration for the tunes remains the same, the cast of characters creating the album is almost completely new. In 2014, CHURCH OF MISERY bassist and mastermind Tatsu Mikami was forced to assemble a new lineup for the band’s follow-up to 2013’s Thy Kingdom Scum. His chosen few reside on American soil: Blood Farmers guitarist Dave “Depraved” Szulkin, Earthride drummer Eric Little (ex-Internal Void) and Repulsion frontman (and former Cathedral bassist) Scott Carlson on vocals.

And Then There Were None marks Tatsu’s first CHURCH OF MISERY endeavor with foreign musicians. He, Szulkin and Little met in Maryland to rehearse the bassist’s riff-ready material. “It was a challenge because there was not much time to make this record—only two weeks,” he explains. “One week for rehearsals and then one week to record all materials.”

Carlson wrote all the lyrics for And Then There Were None, which also marks the first time he’s done vocals for a full-length album since Repulsion’s genre-inventing classic,Horrified.  He comments: “I was afraid to listen to it for a while because I haven’t recorded a full album of vocals in almost 30 years”

And Then There Were None will be released via Rise Above Records on March 4, 2016