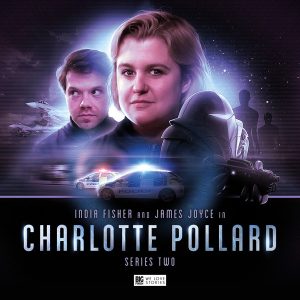 Even when the second best of the Doctor’s companions (sorry Charley, Evelyn will always be the numero uno), in the company of Robert Buchan and a slightly wayward Viyran who will later become known as Bertram, emerges from the Ever and Ever Prolixity in modern day London, she can’t escape her destiny, which mostly revolves around fate dropping her in the middle of mysterious life and death situations. After dumping its heroes unceremoniously – and without an Oyster card – in the middle of the London Underground, Charlotte Pollard: Series Two sets off at warp speed and doesn’t touch the brake or lift its foot off the accelerator for its entire duration.  It is, truth be told, an incredibly brisk and speedy tale of strange assassins known only as Identical Men, government cover-ups, insidious aeons old extra-terrestrial agendas and a genuinely gripping threat to humanity’s continued existence that subverts traditional Science Fiction tropes and opts instead to pursue a far more intelligent, meticulously planned and detailed approach to story-telling.

I could delve far into its deliciously complex time oriented plot that allies the media, conspiracy obsessed hackers, furtive bureaucracy and clandestine intelligence departments with Charley, Robert and Bertram in an effort to save the world from the deadly goings on in Tube Stations. But I won’t because I don’t want to spoil even a minute of a story that’s steeped in double dealing, self-serving enterprise, mistrust and all guns blazing, and tense political, action. And I could wax lyrical about the sting in the last chapters tale that genuinely feels like you’ve been slyly gut punched by your best friend after he’s told you that he’s running away with your wife and the way it’s finale ignores convention and choses to follow a much darker road, but I won’t. Because you need to hear these things for yourself and you need to submerge yourself in the dramatic fury, magnificent characterisation and performances and sublime writing of the adventure that is Charlotte Pollard Series Two.  It’s good to have you back Charley… Tim Cundle