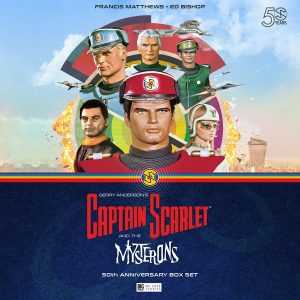 Captain Scarlet is indestructible! Or after 50 years so it would seem that’s the case as I’ve been assigned The Captain Scarlet 50th Anniversary box set to review, which really is incredible; for me anyway. Unlike my other reviews which focus on Doctor Who, which I have a pretty in depth knowledge about, I’m flying blind where the good captain is concerned. Or more accurately, at least partially sighted. I’ve heard of Captain Scarlet, however the last time the re-runs were on T, I was of an age where it terrified me. Nearly twenty years later, I think it’s time to grow a back bone and revisit this rather fascinating sixties Sci-Fi Supermarionation series.

I’m not going to review everything included in the box set as it would be more akin to writing a novel instead of something that’ll just fill, and make for a rather enlightening, coffee break. Let me just say that the contents are extensive and well worth the price tag.

First up, the mini albums. Opening the set are the five original Captain Scarlet mini- albums originally released back in 1967, which to my knowledge haven’t been re-released since their original pressing.  So this is a real piece of audio history. Each album is roughly twenty minutes long and is a short episode made specifically for the format. I really enjoyed each album and felt the story lines were quick paced, action packed and thoroughly absorbing. The sound production is like a fine wine for the ears. Yes, you can tell they were recorded fifty years ago, but you can also tell it has been a labour of love for whomever it was that polished and cleaned up the sound for today’s more quality conscious audience. And you don’t have to be a die-hard fan to enjoy them. As I said at the start, I went into this pretty much clueless about Captain Scarlet’s mythology, and at no point did I get lost. Everything was explained in the first album and from then it was incredibly easy to keep up.

Next up is a small soundtrack album with snippets of music, trail pieces, end totals and start titles. Situated in in the middle of the release, I found it slightly jarring, and feel that, unlike the mini-album serials, this really is for the die-hard fans. As a newcomer to Captain Scarlet, I feel it could have been placed at a more strategic point in the box set, although the magic of technology and audio releases does mean that you can listen to any and each part in whatever order you wish.

Penultimately, the set features eight TV episodes converted to audio with linking narration by Captain Blue, or as he’s more commonly known in the real world Ed Stoppard. These are a very nice addition and allow us to enjoy more of the history of the fight between Spectrum and the Mysterons. Again the sound quality is breath taking and I have to say Captain Blue sounds the same now as he did 50 years ago, although in parts it feels as though the narration takes away somewhat from the thrill of the episodes, however for the sake of continuity it is absolutely necessary.

Finally, the last part of this set that has been crafted with love, is the 50 years of Captain Scarlet documentary. This just over an hour long piece, produced and narrated by Jamie Anderson is where this collection really shines. Through new and archival interviews Jamie has forged a production that not only focusses on the good Captains exploits, on television and behind the scenes, but also offers a glimpse at the inner workings of Century 21 and the way his father created the show. From actors, to props men, we hear from them all and it hooked me in, line and sinker, with every detail and reveal. The interviews are done with a great fondness from all involved and really help to set the scene about what it was like to work for Gerry all those years ago. No stone is left unturned, as everything from puppet making, to story editing, filming and even what the prop man got up to in his spare time is included and it really is a treat for anyone interested in the behind the scenes world of television.

Over the past seven or so hours I’ve had the pleasure of enjoying not only fantastic stories from yesteryear, but also the art of sound and audio production at their very best. Everyone involved deserves a hearty handshake and a pint for all the passion, energy and enthusiasm they’ve injected into this set. Not only is it a celebration of Captain Scarlets 50th anniversary, it’s also a celebration of the fans, the creators and everyone involved in this seminal serial. Spectrum is green! Legeon Henderson