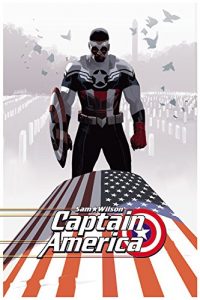 Literature often mirrors the social, economic and political climate of its time. And this third collected volume of Sam Wilson’s tenure as Captain America adheres to, and thoroughly embraces those tenants of the written word in order to tell its electrifying and utterly absorbing story.  Civil War II sees Sam coming to terms with the split in the superhero community and becoming an unwitting pawn of, and being manipulated by, his “best friend” Steve Rogers while savagely lambasting the more unpalatable aspects of the modern world which, even in the Marvel Universe, is slowly going to hell in a super-soldier serum powered handbasket. The streets of US cities have become the stomping ground of a private police force controlled by right wing politicians, business and “talk-show hosts” with a fixed agenda for the future of America, while the skies are pock-marked with warring heroes whose obsession with their own absolute version of “right and wrong” has taken over their reason and left them oblivious to the slow disintegration of that which they swore to protect. This is the reality that Sam Wilson finds himself drowning in as the ultimate symbol of righteousness in a country that, following the rejuvenation of Steve Rogers, doesn’t believe in or even want him.  But he’s what they’ve got, and having witnessed the sacrifice made by his friend James Rhodes in the name of duty, Sam will be damned if he’s going to turn on his back on people because of something as petty as narrow-minded, ill-informed and bigoted populist opinion and stands firm against the forces of corporate darkness as they attempt to enforce their will, by force, on the people that Captain America has sworn to defend. It’s a clash of beliefs that can only, and does, end in violence and bloodshed while the world that Sam thought he knew slowly, and perhaps irreparably, changes around him.

Nick Spencer has imbued Civil War II with all of the elements of the fraught and fragile mood that has crept over the globe, and has used them to amplify the simmering tension that builds to an explosive finale before fading into the stunned, pain filled lull, the intermission in which both sides lick their wounds before returning to the field to score a final, decisive victory. It’s a raw, uncompromising tale that more often than not, and by design, touches a nerve and hammers its point home in grandiose fashion by gripping it’s audience by the lapels and screaming “Look at what we’ve become, look what’s happened to us. We can be so much better than this. We are better than this”. This is, so far at least, Sam Wilson’s finest hour and it’s here, in Civil War II, that he has, at long last, become the living avatar of everything that Captain America is supposed to, and should, represent.  And Unzueta and Acuna’s achingly gorgeous artwork makes the story pop, gives it an extra edge, lets you to fall into it and feel like you’re experiencing it first-hand, as you can almost smell the blood and hot asphalt and taste the anger and fear that permeates every page of Civil War II.  This is everything that Captain America should, could and can be and it is absolutely astonishing.  O Captain! My Captain… Tim Cundle