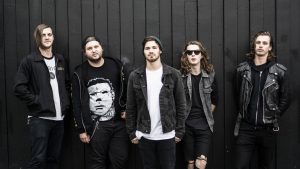 My name is Axel Verstraeten and I play guitar in This Gun for Hire.  Let me share with you what effectively “ruined my life” without even knowing it.  The following has learned me to not cope in ways that only add to life’s pain because as beautiful as life is holds limited moments of pleasure among plentiful trying times. So on that sort of note what in the blazing blitz bonkers was or is it? You really want to know eh? Alright well since you’re still with me here I guess I’ll confess what I let permanently change my life.

Music. Everyday I’m fiercely loyal to my creative endeavours. I actually enjoy writing songs way too much. You see–I didn’t learn music the traditional way.  Nope, in fact I still don’t know how to read my favourite songs in standard notation. But that doesn’t matter because in life I’ve been through an awful lot and found restitution for my sanity in easing back with my guitar, hearing the whirring of my amp and watching how the other members of my band interact. I want to write a better song with each and every attempt. This is something you can do when you have no limits or creative insecurity.

Sometimes I reflect on the person I used to be before I started amassing musical equipment and spending countless hours honing my style. It’s hard to make any real sort of prediction on where I’d be today. Having struggled with all kinds of things in the past, music kind of saved my life as much as it did set me back. A few years ago after a bad break up I thought I’d never be in another band buy cofounding my own project has breathed new life into what being the artist you were born to be is really about. Fast forward to today–I can’t envision a life without music and I couldn’t have picked a better group of guys to share the road ahead with.

All told; I’m confident that at the very least This Gun for Hire will get to play some cool shows and share the stage with many acts. I know I speak for everyone in the band when I say that we are making the necessary sacrifices to give ourselves the best chance at making music our living. I personally am from Argentina, I love to travel far and long. There would be nothing cooler for me than to travel with my best friends, and play the music I love to play night after night. My first full length album I get to put my name on is also my bands’ debut album entitled “Something a Little More Sinister” and its released on all platforms March 31st 2017. We got tons of content coming out within the coming weeks in the likes of music videos, instrumental play throughs, rig run downs and much more. If you’re into clean post Hardcore vocals with a beer chugging metal-core edge then buy this record. With your money.