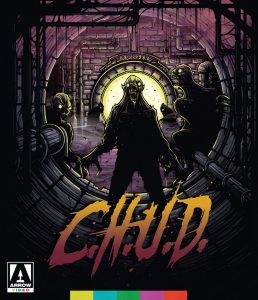 After a spate of disappearances, a local police captain is forced to take matters into his own hands to uncover a grisly cover-up involving the cities underground population in this infamous cult horror flick.

For reasons I never understood, my local video store as a child in the 80s used to keep the rental boxes face up in a pair of, presumably broken, supermarket style flat freezers. Whenever my parents would be picking up their odds and ends, pre-teen me would immediately rush to these freezers and peer over the edge to see the latest and greatest. Despite being a small village store, they seemed to specialise in the kind of films put out by Cannon Video which would all immediately catch my gaze, wondering what amazing content they contained. Naturally, the majority of these being rated 18 meant that my imagination would have to do for the time being, but the covers all looked incredible.

C.H.U.D. definitely had one of these covers, as nothing screams ‘Watch me!’ to a child other than a monster crawling out of a sewer. A film that history has remembered fondly, through pop culture references in The Simpsons, to the butt of an April Fools joke by Criterion, renowned for their releases of the most prestige of titles. Watching the movie, it’s a little difficult to actually work out why this is the case, over many other horror pieces released and forgotten about from the early 80s. On review, it feels like two separate movies fighting amongst themselves – one a slow investigation into government and police corruption, the other a monster movie with surprisingly good character design. Extending either of these to their full potential feels like it could have led to an improvement to the finished product.

That’s not to say it’s bad, but there’s a severe lack of pace at times that betrays the interesting ideas at its core, and sadly it feels like a behind the scenes look at production of the movie itself would provide more entertainment from what we know. But, there’s definitely an existing fan-base for this movie, and it’s remained a cult classic for a reason even if it’s not one I can immediately recognise. There’s an amount of social commentary that’s prevalent in the horror movies of this era, but it’s not developed enough while the traditional monster movie elements feel too far apart, and disjointed from the rest of the story.

This newest Blu-Ray double disc release provides us with both the full length and theatrical cuts of the movie, along with commentary and an extended scene. As usual with Arrow, the print treatment has been kept as authentic to the original release as possible, and will undoubtedly be the best presentation the movie has seen to date.

Overall, I wish C.H.U.D. as a movie was either a lot better or a lot worse – either way it would have made a more entertaining film. As it stands, it feels like the culmination of a handful of ideas that never fully flesh out that maybe takes itself a bit too seriously given the source material, and overall it’s a pretty average watch. If only I’d watched it as a kid, the monster scenes probably would have completely won me over. James Connors