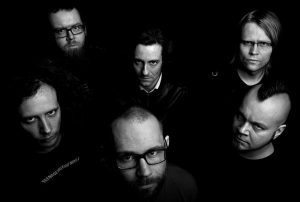 Iceland is known for being a country of writers and story-tellers. The rich history and wild nature, combined with the long cold days of having to stay probably have a lot to do with the creativity of it’s natives. In the 21st century metal seems to have the become the premier way of spreading the word of the vikings far beyond the shores of the isolated island. Skálmöld have become masters of words and music since their inception in 2009 and ensuring that all of their lyrics are in Icelandic keeps them true to their own roots and heritage, and with Vögguvísur Yggdrasils the band have wandered further into the history of their culture, home and mytholgy.  Þráinn Árni, one of the guitarists for Skálmöld, found a bit of time on their current Euro-tour to answer a few questions

MM: With every record you release there seems to be a wider discrepancy between the bombastic metal and the raw vocals. That great balance between melody and amazing musicianship, and well, hard-hitting primitive screams. It still works marvously, but I wonder if there’s a limit to this, or is this also something you’re figuring out with every song you write?

Þráinn Árni: This just kinda happens … We never intend to write epic songs, we wanted to be more Metal on our third album but that´s it. We started writing for this album as soon as we started touring our third album and this just happened. We worked on the songs and were well prepared when we entered the studio. When we write it´s usually a holy moment, we tear into the riffs and the songs get changed quite a bit over the course of the writing period. But when we find the magic it pleases us … And hopefully you too!

MM: There’s also this split between songs that have a anthemic edge, perfect for going into battle, and the songs that seem to have a more distant, narrative approach. Is that duality what lies at the core of Skálmöld?

Þráinn Árni: We have not gone into too much theatrics with our albums but we do have a few atmospheric soundscapes on all of our albums, one song per album I think.  We also have very cool intros in my opinion! But if we get too carried away with the “in between songs atmo” we might get lost! The songs are epic I think but adding too much sounds for added atmosphere could ruin them…

MM: Linking in with that I’m also curious about how Icelandic history has influenced your music? The country is founded by vikings, but hasn’t seen any major battles for a thousand  years. So battle hymns obviously gave way to sagas over time. Do you look for that variety in lyrics where you combine songs about war, love, honour, courage, sagas, nature and history? And is music a natural conduit for those themes and ideas…?

Þráinn Árni: We have had battles here every century since the time of the sagas but they are not very big nor very important in the big picture. We love history and we are very proud of where we come from. The lyrics are about honour because we believe that if you are honest in your work, you will succeed. Using our heritage in our music and lyrics is a natural thing for us and living in Iceland has of course made us what we are, and is everything that moves us inspires us. It affects you when your mother wakes you up in the middle of the night to watch the volcanic eruption lit up the sky close to your home. This happened a few times over my childhood and it affects you. You gain a tremendous amount of respect for mother nature! Nature will always win, don’t fuck with it!

MM: Has everythng that you’ve done Skálmöld also changed your view on your country / heritage too? I reckon you must have learned a lot about history and it’s stories by studying them for your lyrics…

Þráinn Árni: I think we all knew a lot but of course we go deeper into things because this is what we want to do, and we wanted to do it very well.

MM:How important is it to keep your lyrics in Icelandic? Does it help to dive even deeper into your subject matter? Do you think you’d lose any of your power  and creativity if you wrote songs in English?

Þráinn Árni: We could never sing in English and keep our integrity. We have to keep our language alive and introduce it to the world. There are so many people we meet on tour that are now learning Icelandic just because of our music and lyrics. How cool is that? If we would have started singing in English from the beginning, these people would not have heard the language. We have to preserve our heritage.

MM: Although the concept of Skálmöld seems to be one that looks back to when Iceland was founded, and the sagas came into being, you’ve made a video using mobile phones, and are very prominent on the internet. So, can I conclude that it isn’t all about history and the past with you? Do you like living in modern day Iceland, or have things changed too much over the years?

Þráinn Árni: Things have changed a lot in Iceland. Just before WW II most of the houses here were built from mud and stones. The rich people could have houses made from timber but after the war, money came to the country and the workers, men and women, could get jobs and earn money.
I love our history and I love visiting the old turf houses but I would never want to live in one and most certainly do not want my children to grow up in one. So, by respecting your past and knowing it, you can make a better future. We, the band, love the sagas but we are playing in the 21st century and I don’t want to play stones and bones, I need my electric guitar and heavy metal!

MM: On a side note, I read the Icelandic government has used (or is using) tourism to strenghten the economy after the major blows the country had after the banking crisis. Which is a good thing as it helps generate income, but I’ve also heard said that TOO many people are now planning to visit Iceland. What are your thoughts concerning the tourism explosion? After all, your music is good promotion for the country too…

MM: What I personally like about your band is the great sense of humor that seems to accompany your music. How important is that fun aspect? You’re serious about your songwriting, but YouTube videos (Jamaica!!) and the great clip to Niðavellir also show a lighter side that many metal bands don’t seem to have…

Þráinn Árni: At the same time we maintain a lot of professionalism. We want to do things better than good, it has to be great. But yes, humour is important. When musicians take them self too seriously things can go bad, and I mean very bad. Be proud of what you are doing and do it awesomely, but maintain the humour!

MM: Speaking of Niðavellir, who came up with the idea? Just wondering… how big was your budget? The result is great though and I love the DIY feel…

Þráinn Árni: We were doing promo shoots for the new album when somebody said; let´s do a video and we started talking and the thing evolved. We did just one take, and that´s it! My phone stopped recording because the memory shitcard was full and Jón accidentally turned his phone off. We thought it was funny and did not want to do it all over again. I think it turned out great and as for the  the budget… What budget?

MM: How do you decide on what concept to use for any particular album? Are the lyrics always your own words, or do you also take (part of) lyrics from stories?

Þráinn Árni: We all talk about what the story should be. We want it to be an original story but we use stuff from the old sagas. Then Snæbjörn our bassist writes the lyrics. He asks us what we think and we tell him if it´s any good!

MM: Are the different albums also linked in some way, do they tell an ongoing story, or should they be viewed as seperate entities?

MM: What’s next for the band? Seems that with all the great bands, the great results of the football team, and the tourism-promo campaign, Iceland is about to conquer the world. have you noticed that positive vibe?

Þráinn Árni: I have noticed a positive vibe for the past years. The way this band is moving forward never stops to amaze me, the record company (Napalm Records) is behind us and doing a great job and things could not be better! We are now touring Europe, supporting Korpiklaani and so far, the tour is going superbly! Thank you for the wonderful questions and see you on the road!