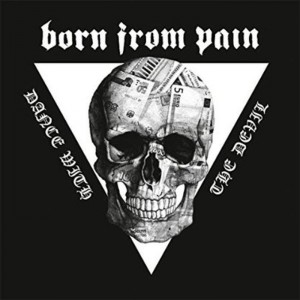 Born From Pain – Dance With The Devil (BDHW / Soulfood)
The heavy machinery of war is creeping up to deserted cities, bringing nothing but death and emptiness. ‘Dance With The Devil’ is filled with lethal ammunition, piercing one hole after another in armoured vehicles. No-one is safe, you can be certain of that. With military precision the genocide unleashed by Born From Pain can only be successful. It’s tighter than Hatebreed, more aggressive than Cavalera Conspiracy and deadlier than ebola. Like the four horsemen of the apocalypse, with a blood­red sky as their divine backdrop, the band rides towards us. Metal core, as a genre, has been given a new meaning, a new flag to pledge allegiance to. It has been quite a while since I was this impressed by a band carrying these influences. Martijn Welzen