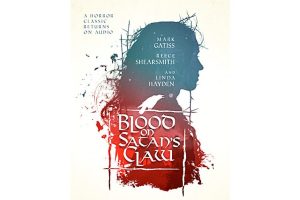 Disclaimer: I’ve never seen the original film version of Blood on Satan’s Claw. It’s almost exactly as old as I am, and I grew up in an era where if you missed movies, you missed them, so I came to the new Bafflegab audio version, adapted for a modern audience by horror writer Mark Morris, with an empty mind, free of any comparison data.

I may well go back, now I no longer live in the age of missed opportunities though, having heard this version, to see how strictly the adaptation sticks to the original, and how much it’s been brought up to date to resonate with the fears of a new generation.

I might do that because on the surface, Blood on Satan’s Claw shouldn’t resonate at all with the age of smartphones, cynicism and selfies – it’s a tale of 18th century rural god fearing folk, of mysterious animal carcases discovered in fields, of malign forces taking over, for reasons entirely of the demon’s understanding, a small country village, and of the square-on fight between good (as manifested by the powers of authority, the church and the squire) and evil (as manifested by a demon and its servants). It’s more or less straight melodrama, which should, and to some extent does, trip up a modern audience which expects deceit from grown-ups, hidden games, collusion in deep cover and the like.

Morris’ version though strikes enough modern notes and balances them against the classical to deliver a taut drama of the edge of things – good and evil might be its primary colours, but there’s a modern sensibility in evidence here: teenage sexuality, innocence and experience are all on display as part of the fight for the soul of the village, along with peer pressure, the unrestrained ambition of the young, the potential effect of grief as a portal to ‘dark forces’ (interpreted literally here, but inviting the listener to take them allegorically too), and in a particularly unnerving sequence, the precociousness of a young woman claiming to have been ‘ravished’ by an adult, and turning the narrative on a notion to which we are these days rightly wedded – believing the potential victim. It’s a principle which is right and fair, but in a village where ‘the Devil’ is at work, there’s something harsh and uncomfortable about the way in which precociousness turns the views of the villagers on their heads about who they can trust.

In fact, precocious female sexuality is shown in a believable 18th century context throughout, as a pathway to destruction of all that is pure and good – when we’re introduced to Angel Blake, the prime mover of dark events in the village, it’s by report, and we’re told she’s had ‘little virtue’ since the death of her mother. Not long after that, we hear her and her best friend Margaret teasing innocent Mark Vespers with teasing touching games, and the denigration of his innocence has a power that speaks to us on a modern playground level as well as its 18th century equivalent. ‘Maybe he thinks what you’ve got between your legs will bite his fingers off,’ jokes Margaret, with a brashness of sexual power that subverts the society of her day and speaks more to the potent sexualisation of youth that is a mark of the 21st century. Similarly, throughout the adaptation, both Angel and Margaret use their sexuality and their availability, their willingness to do the things their society tells them are ‘sinful,’ to bring converts or sacrifices to their ‘diabolic band.’

If there’s modernity about the messaging, there’s stolid certainty about the melodrama – the ‘fiend’ that’s uncovered in a field has a very Hammer House Of Horror feel (even though Blood On Satan’s Claw was not actually a Hammer movie), and the world of the story is very plainly the demon-haunted, god fearing world of earlier times, the lines of storytelling fairly linear and moving in black and white – it’s only when Angel moves to actively blur them for instance that those lines seem less than clear.

There’s an attempt here to show the strata of the rural society; the local lordling, his mother and his fiancée have a run-in with the devil of the piece, leaving two of them missing presumed consumed and one having cut off their own hand for fear of it becoming a claw. The squire, who harbours romantic aspirations towards the lordling’s mother, Lady Isobel, is brought into the action, and acts for the most part as the arch-rationalist of the drama, until he starts hearing voices and seeing visions in the night. For the most part, while these dalliances into the higher strata add some distracting and disturbing scenes, they’re symbolic of the relative impotence of established social structures against the power of the devil, which begins its ascent through the lower classes and the youngest in society, presenting the establishment with a choice it feels is impossible – can it countenance the destruction of its own children to beat the devil?

That’s something of a grand, classical, even scriptural theme there – would you sacrifice your child in a gesture of obedience or adherence to your god, if it turned out your children were going against everything you knew and cherished? But make no mistake – the real meat of the piece is down among the youngsters, where the struggle to remain ‘good’ against sexual awakening and peer pressure are the major chords on which the drama is played.

Where Blood on Satan’s Claw is most successful is in its atmosphere – from early in the story, when the fiend is discovered and Angel and Margaret flaunt their sexuality to Mark, you’re constantly waiting for the other shoe to drop, for the tease of terror to materialise into the actual, outright horror of action. It doesn’t under-deliver either – there are a handful of sequences which are truly gruesome or sickening to contemplate, including at least a couple of killings, and a whispery children’s demon-summoning ceremony. But it’s in the self-assurance of ‘devilish’ characters, chiefly Angel and Margaret, that this tension is stoked – their knowledge of ‘worldly’ things, the easy scorn they pour on the strictures of 18th century society and establishment, make them very compelling devils to follow. One of the most horrifying scenes in the story comes after a killing, when the children deliver a body back to its home, and listen, waiting to giggle at the reaction of the relatives of the corpse. That self-assurance, that treatment of the pain of others as play, works horribly well here.

If there’s a downside, it’s that the ending is actually underplayed. There’s a twist you’ve grown to expect, certainly, but it’s rendered in the same tone of knowledge and certainty as much else that’s come before it, where, if anything, it feels like it needs more oomph or more decisive action. As it’s rendered on this audio, it rather fizzles after the high-energy cataclysm that brings events to a head in the village. A shame, and a downbeat note on which to end a story that for the most part pulls the listener along, dreading what’s coming next, but willing it to come anyway.

Mark Morris’ Blood On Satan’s Claw delivers more than two hours of a world going mad from the bottom up, in a production that bristles with fear both ancient and modern, and keeps you constantly on edge, waiting for the next episode of ghastly, demonic bullying to come and put you through the wringer.

On the strength of this release, we can only look forward to further upcoming dabbles with classic horror – watch out soon, as Bafflegab brings Clive Barker’s The Hellbound Heart to audio life. After this adventure into the heart of youthful darkness, we say bring it on! Tony Fyler