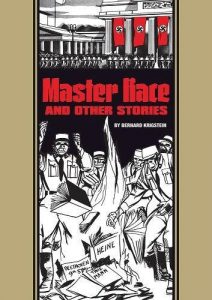 If you were asked to name one EC artist, who would be the first to trip off your tongue? Jack Davis? Will Elder? John Severin? Wallace Wood? I’d be willing to bet that nine times out of ten, it wouldn’t be one particular name – and that’s Bernard Krigstein. I hold my hands up, here: I wouldn’t have said Bernard Krigstein, either. And there’s something damned peculiar about that statistical omission, for Krigstein is at least as good as his aforementioned fellows.

Admittedly, Krigstein was something of a late-comer to the EC ranks, personally invited by editor Harvey Kurtzman to join them just one year before the newly introduced Comics Code Authority  all but put EC out of business, but in that period he produced a substantial body of work for them right up to the end (literally, in Incredible Science Fiction issue 33, the very last EC comic book).  Along the way, he worked with writers such as Al Feldstein, Carl Wessler, Johnny Craig, Otto Binder, Jack Oleck and, last but not least, Ray Bradbury. By most accounts he was far more than just a jobbing illustrator,  keen on experimentation with different styles and techniques to befit a story, and eager to suggest a ‘bending of the rules’ when it came to format and presentation.  Krigstein’s attempted ‘elevation’ of the comic book at form was mostly welcomed by his co-creators (and today he is regarded as  a major influence by industry professionals) but Bill Gaines himself once described him thus: “Brilliant, but he drove us crazy.”

So, the question remains … why isn’t Bernard Krigstein more of a name? My theory: because he was so good an artistic chameleon, difficult to pinpoint, difficult to track down; and had you seen his work back when, you would have found it difficult to ascribe to one particular hand.  It’s possible because his body of work came in so many styles that, ironically, it was not remembered as a whole, at least by readers of the time. Now, here it is, gathered, and as you browse this hugely enjoyable collection of 32 tales of science fiction, horror, crime and human nature – including my personal favourite, The Bath, a thoroughly telegraphed yet nonetheless ultimately satisfying tale of revenge by piranha fish – you’ll believe you’re looking at a compendium of the work of six or seven artists, at least. But it isn’t: it’s Bernard Krigstein.  With a comprehensive and informative introduction by Greg Sadowski and biographical and behind-the-scenes afterwords, it’s an absolute treat. Mike Wild