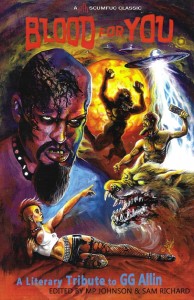 Blood For You: A Literary Tribute to GG Allin
Edited by MP Johnson and Sam Richard
First 200 orders include a 2.25″ limited edition collector’s button

“Blood For You brings together a handful of top-notch horror writers to spin tales centered around the controversial punk legend.”
– Dread Central
Think GG was extreme? You don’t know the half of it.
GG Allin’s exploits are legendary. The music, the shows, the violence, the bodily fluids. But GG Allin was confined to a world where he couldn’t fulfill his potential. He punched and kicked at the boundaries, eager for something bigger, something crazier, something much more fucked up. But the real world refused to give him the adventures he needed.
Now, thanks to underground fiction’s most talented scumfucs, GG is cast in a series of adventures that truly befit his outlaw spirit. In these pages, GG Allin is a secret agent, engaging in cult-smashing missions in exchange for dirty sex with George and Barbara Bush. He’s a shit-eating, spaceship-piloting and time-traveling savior of humanity. He’s an orisha, called upon to save prisoners from ‘roid rage mutant guards. He’s one half of a deepfried onion ring ouroboros with his soulmate John Wayne Gacy. He’s thousands of clones living inside your giant robot body.

All Aggronautix items are now available for purchase on www.aggronautix.com and will also be available at independent record stores, comic shops, tattoo parlors, etc via distribution by MVD Entertainment Group.
Pre-order now at http://aggronautix.com/
Follow Aggronautix on Facebook, Twitter, and Instagram
***For orders outside of the United States, please note that items will take longer to arrive (average of 3 weeks)***