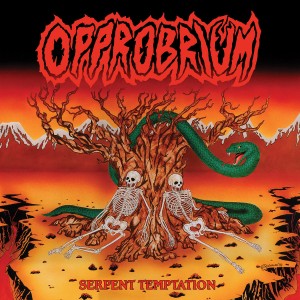 Heads down for some old school thrash. Back in the day, this was exactly how it was done. Opprobrium play fast, they don’t stop for breath, and they knock out tunes in no-nonsense fashion.  Raging guitars and intense thrash drumming are hammered home with excruciatingly evil thrash-tastic vocalisation. Originally released in 1988 and still showing many of todays thrash/crossover bands how to deliver a serious portion of vigorous speed and skank imposed moshcore. The remastered production bodes well and the inclusion of the 1987 four-track demo is an appealing addition and not a cringe worthy attempt to add “everything”. While the demo songs are played at break neck speeds, and delivered way more ferociously tone, their place as a bonus and gudie to the bands evolution is invaluable. There’s an underlying 80’s character to the whole record which gives it a certain distinctive aura and character, but one, that like an old friend, is always a pleasure to stumble across. Diehards will be well aware of these New Orleans pioneers, but for those who don’t know them and are only now beginning to delving into the realms of thrash and all things crossover, ‘Serpent Temptation’ is a must have album. Mark Freebase