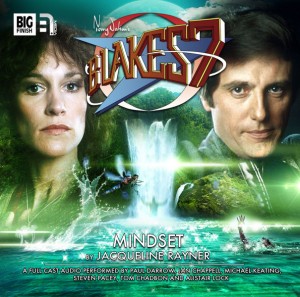 Blake’s 7: Mindset – Starring Michael Keating, Paul Darrow, Steven Pacey, Jan Chappell, Tom Chadbon, Alistair Locke & Geoffrey Breton & Written by Jacqueline Raynor – CD / Download (Big Finish Productions)
It’s a well-documented fact that some myths and legends share a common origin, and as such have spread through communities and societies the world over; and while details may change, the core remains the same. Tales of knights fighting dragons, “gods” challenging heroes to perform great tasks, hidden cities of vast wealth and god, and of course, the enduring favourite, the ‘fountain of youth’, the fabled source of immortality of which humanity has dreamed since it realised the finality of the grave was something it could never escape without the aid of “magic”. And if it’s woven its spell through all of Earth’s cultures for thousands of years, wouldn’t it seem logical that it would be do the same in the future? That the legend of the ‘fountain of youth’ would eventually spread to the stars and far beyond, an idea that forms the central plot for ‘Mindset’, the latest chapter in the current Blake’s 7 series.

While searching for Dana, Vila stumbles across a common name in all the raw data that the crew of the Liberator have acquired while tracking their absent colleague, and digging deeper he finds what he believes to the be the source of the ‘water of life’. After diverting the Liberator to its source, Vila goes missing, and after being sent to find him, so do Tarrant and Grant, and as their communications fade, Cally hears a voice calling out to her from the planet, the voice of one of her people. Sent to find her crew mates, Cally discovers the truth about her new friend just as Orac and Avon find out the truth about the legend, a truth that has trapped not only the Liberators crew, but all of those who went before them, trapped by the true price of immortality. Even the Liberator isn’t a safe haven for its compliment of desperado’s, as something returns with them from the planet. Something ancient, something that wants to live, no matter what the cost may be.

‘Mindset’ is an entertaining, self-contained diversion from the main thread of this series, that pushes Cally to the forefront of the action and allows her to shine rather than being part of the ensemble, and shine she does. It’s an absorbing story, that thrives on characterisation, especially the relationship that develops between protagonist the rather enticing, two-faced, narcissistic villain-of-the-week and even though the reveals and twists are a little obvious, it doesn’t matter as you’re pulled into, and absorbed by the story thanks to the faultless way that they plot evolves and the flawless performances and interaction between characters. Sometimes you just need a mid-season break from the main action, and ‘Mindset’ offers the perfect mini-vacation and an excuse to get away from it all and enjoy yourself in the company of a band of desperate, space faring rebels. Just don’t go in the water… Tim Mass Movement