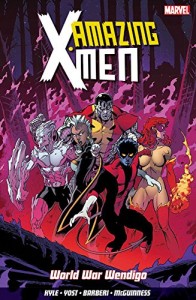 Amazing X-Men: World War Wendigo – Craig Kyle, Chris Yost, Paco Medina, Ed Mc Guinness, Katheryn Immonen, Iban Coello, & Carlo Barberi (Marvel / Panini)
Do you know what a Wendigo is? In Native American mythology it’s an insatiably hungry, cannibalistic demon that possesses people, but has a particular fondness for those who indulge in the consumption of human flesh. Maybe it’s because they’ve already got a taste for it which makes the spectres job easier, I don’t know, but whatever the reason, a Wendigo is bad news to the tenth power and then some. So, imagine the untold horror that the X-Men have to face when an entire Canadian town falls victim to the spirits of the malicious fiends following a blackly funny (you know, you shouldn’t laugh, but you can’t help yourself thanks to the mischievous imagery that illustrates the incident in all its gory detail)”accident” at a local meat packing plant. Facing wave after wave of Wendigo, each of them having the ability to infect anyone they come into contact with through the gnashing of fangs and flashing of claws in a vicious biting and scratching frenzy, the X-Men find themselves up to their mutated necks in trouble, as they try to stem the tide while the Avengers man the border to make sure none of the monsters make it through to the US of A. And then things get really crazy, as one of their own falls victim to the Wendigo, all hell breaks loose and the X-Men have to confront, and stop, an ancient deity if they have any hope of saving Canada from the plague of Wendigo.

‘World War Wendigo’ is a wonderful collision of magic, trips to the spirit world, mythology, folklore, break neck story-telling, jaw dropping supr-heroics, smashing and bashing, incredible characterisation, snappy dialogue and dark humour (the idea that the Wendigo curse only works in Canada and the ramifications that stem from that are, at times, laugh out loud funny, even though in the midst of all the death and carnage, you know you shouldn’t be laughing. But you will, because you won’t be able to help it) that rattles along at breakneck pace, leaving you breathless and riding high on a wave of adrenaline. The artwork is fabulous, the plot and pacing ridiculously good, and as much as I’ve been enjoying Bendis’ run on X-Men, I don’t think I’ve enjoyed an X-Men story this much since the fabled days of Chris Claremont’s run on the book. Absolutely, and thoroughly, recommended… Tim Mass Movement